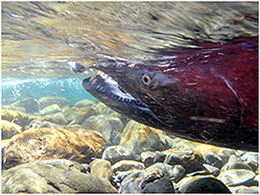 In the 1990s, ADF&G contributed to the development of a genetic baseline for Chinook salmon using protein variation to infer genetic information about salmon populations (Crane et al. 2000 - PDF 2,253 kB ; Teel et al. 1999 - PDF). The number of populations from Cook Inlet in this baseline was insufficient to provide the resolution needed to detect stocks in mixed stock fisheries of Cook Inlet. From 2003 to 2007 a standardized DNA-based genetic baseline was developed for use in fisheries from Southeast Alaska to California which used the more powerful technique of microsatellite analysis (Seeb et al. 2007). These microsatellite markers and techniques were then used in a study of early and late-run Chinook salmon in the Kenai River Drainage from 2003 to 2006 (PDF 397 kB). To detect the fine-scale population structure of Chinook salmon within Cook Inlet more recently, we have taken advantage of advances in single nucleotide polymorphism (SNP) technology. This proven genetic technique investigates genetic variation at the finest level — the nucleotide. We screen for changes at specific locations along the DNA molecule where a single nucleotide may differ between chromosomes. These locations are known as single nucleotide polymorphisms or "SNPs". The current baseline contains genetic information for 46 SNP markers from approximately 5,279 fish (PDF 863 kB) from 30 major spawning Chinook salmon populations in Upper Cook Inlet . The baseline was tested to determine how well it represents all populations and how well it can identify stock components in mixed fishery samples. After completion of the baseline testing, harvest samples from the 2010 and 2011 east side set net fishery were analyzed to estimate stock composition of the harvest for each year (PDF 579 kB). The genetic baseline is being continually improved to refine its ability to accurately identify stocks in mixed fishery samples. The next baseline update, scheduled for 2013, will include samples collected in 2011 and 2012 representing 13 additional Cook Inlet Chinook salmon populations.