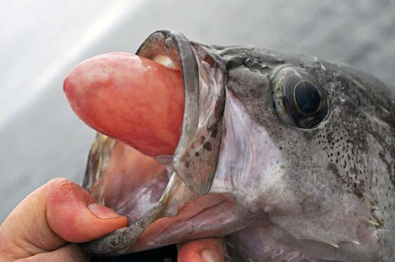 The stomach protrudes from the mouth of a barotrauma-impacted black rockfish. Anglers can reduce mortality in rockfish by employing deepwater release techniques.

Beginning in 2020, all vessels sport fishing in the saltwaters of Alaska must have a functioning deepwater release mechanism (DRM) on board, and all rockfish not harvested must be released at depth of capture, or at a depth of 100 feet.

Fishery Concerns and Solutions. Rockfish caught in deep water often sustain injuries — referred to as barotrauma — caused by rapid decompression and expansion of gases in the swim bladder. Fish that are released with inflated swim bladders cannot resubmerge and will die. Because of high release mortality,intentional catch-and-release fishing is greatly discouraged, particularly in depths of 60 feet or greater. Alaska anglers can best prevent wasteful rockfish mortality by avoiding waters where unwanted catches are likely. When rockfish are caught incidentally despite avoidance efforts, proper deepwater release techniques can reduce mortality. A recent ADF&G study found that survival of yelloweye released at depth was far higher (98 percent) than survival of fish released at the surface (22 percent).

A variety of deepwater release devices, or recompression tools, are available commercially.

Anglers can also make their own deepwater release devices out of simple leadhead jigs. 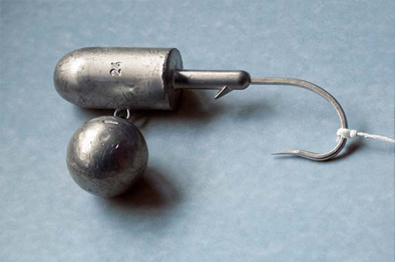 Rockfish are most likely to survive when released quickly at depth by anglers using the following steps: