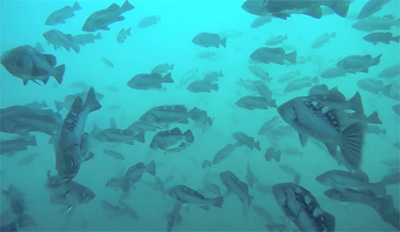 Previous genetic analyses for black and yelloweye rockfish throughout their range suggest stock differentiation may support the use of multiple management areas for each of these species in the Gulf of Alaska. Stock differentiation is likely to occur where oceanographic conditions or currents diverge such as the difference between coastal outside versus inside waters. Population assessment and appropriate management units are informed by an understanding gene flow across spatial units. The goal of this study is to provide baseline genetic information for black and yelloweye rockfish from inside and outside waters of Southeast Alaska, Prince William Sound, and the Northern Gulf of Alaska coast east of the Kenai Peninsula, to be used as a first step in developing future stock assessment and management strategies for these species.

Management strategies for black and yelloweye rockfish are dependent upon stock assessment and status across the Gulf of Alaska. The objective of this study is to estimate the sport fish catch, harvest, and total removals (mortality) for each of these species in geographic units consistent with commercial fishery management areas, both in terms of numbers of fish and in biomass.

The demersal shelf rockfish (DSR) complex is made up of seven rockfish species: yelloweye, quillback, canary, copper, China, tiger, and rosethorn rockfish. Yelloweye rockfish account for approximately 95% of the total DSR catch. Yelloweye rockfish biomass is estimated for the annual stock assessment using the following parameters: density, average weight, and total area of habitat. Rockfish density is estimated from fish counts along line transects performed by a remote operated vehicle (ROV). Average weight is determined from port sampling the commercial fishery catch. Habitat area estimates are determined from the best available information for an area, which may include DSR fishery logbook data and/or bathymetric data.

Model of acoustic survey of rockfish

Hydroacoustic surveys of black rockfish in the Kodiak area

Black rockfish Sebastes melanops is a pelagic rockfish species that inhabit nearshore rocky reefs and are captured mainly in hook and line fisheries. Black rockfish are slow growing, long-lived, have a low natural mortality and relatively high age of maturity making them intrinsically sensitive to overfishing. Part of the State of Alaska’s management responsibility includes conducting stock status assessments of commercially exploited fish populations with the goal of managing for sustainability. With the increasing interest in both the sport and commercial fisheries, developing an abundance-based management plan for black rockfish has become a priority. 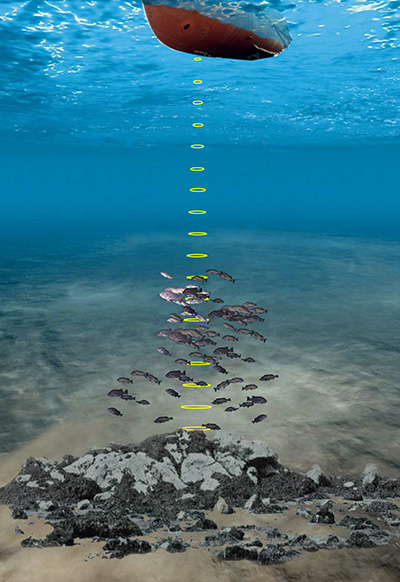