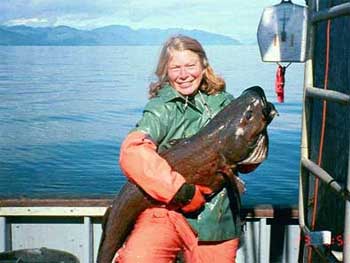 Annual longline surveys using chartered commercial vessels are conducted in the NSEI (Chatham Strait) and SSEI (Clarence Strait) groundfish management areas. These surveys are used to determine catch per unit effort (CPUE) and relative abundance of sablefish. The ADF&G also collects biological data such as length, weight, sex, maturity, and otoliths for aging from sablefish during these surveys.

A research study was performed to confirm the appropriateness of the current method of maturity staging for sablefish. In August 2007 ovary samples and maturity data, including, fork length, weight, and a maturity stage were collected from 215 female sablefish during the ADF&G longline survey in the NSEI management area. The maturity stage was determined by the “naked eye” based on characteristics, such as color and size of the ovary and egg visibility. Ovary samples were preserved and later prepared for histological analysis by staining, embedding in wax, and thin slicing. Samples were then examined under a microscope to determine the maturity stage of each ovary. The maturity classification assigned based on microscopic analysis was compared to the macroscopic classification determined during the survey. The analysis confirmed the overall appropriateness of macroscopic maturity staging at most stages. However, at the “maturing juvenile” stage at least half of the sablefish will spawn in the approaching season as expected, but half may not spawn until the following spawning season. This would indicate these fish were immature and misclassified. We can identify spawners of the upcoming spawning season by the presence of yolk in their eggs. The longline survey is in August, at least four months prior to the spawning season; consequently, the sampling time may be too early to identify all the spawners of the approaching season. 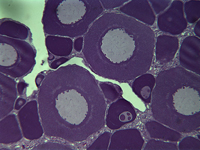 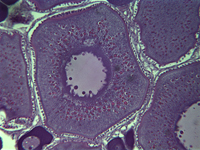 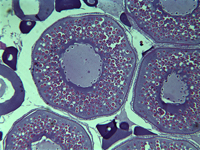