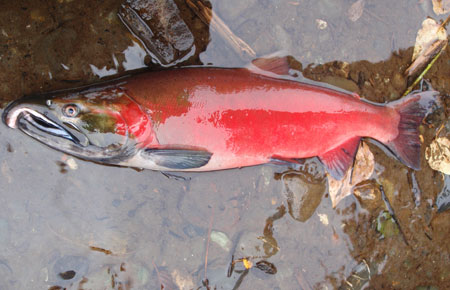 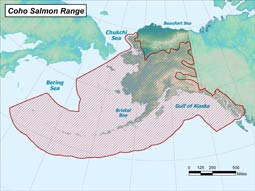 Adults usually weigh 8 to 12 pounds and are 24 to 30 inches long, but individuals weighing 31 pounds have been landed. Adults in salt water or newly returning to fresh water are bright silver with small black spots on the back and on the upper lobe of the tail fin. They can be distinguished from Chinook salmon by the lack of black spots on the lower lobe of the tail and by their white gums; Chinook have small black spots on both tail fin lobes and they have black gums. Spawning adults of both sexes have dark backs and heads with maroon to reddish sides.

Coho salmon enter spawning streams from July to November, usually during periods of high runoff. The female digs a nest, called a redd, and deposits 2,400 to 4,500 eggs. As the eggs are deposited, they are fertilized with sperm, known as milt, from the male. The eggs develop during the winter, hatch in early spring, and the embryos remain in the gravel utilizing their egg yolk until they emerge in May or June. During the fall, juvenile coho may travel miles before locating off-channel habitat where they pass the winter free of floods. Some fish leave fresh water in the spring and rear in brackish estuarine ponds and then migrate back into fresh water in the fall. They spend one to three winters in streams and may spend up to five winters in lakes before migrating to the sea as smolt. Time spent at sea varies. Some males (called jacks) mature and return after only 6 months at sea at a length of about 12 inches, while most fish stay 18 months before returning as full size adults.

In freshwater, coho fry feed voraciously on a wide range of aquatic insects and plankton. They also consume eggs deposited by adult spawning salmon. Their diet at sea consists mainly of fish and squid.

Little is known about the ocean migrations of coho salmon. High seas tagging shows that maturing Southeast Alaska coho move northward throughout the spring and appear to concentrate in the central Gulf of Alaska in June. They later disperse towards shore and migrate along the shoreline until they reach their stream of origin.

The emergent fry occupy shallow stream margins, and, as they grow, establish territories which they defend from other salmonids. Coho fry live in ponds, lakes, and pools within streams and rivers, usually among submerged, woody debris- in quiet areas free of current.

Coho are found in coastal waters of Alaska from Southeast to Point Hope on the Chukchi Sea and in the Yukon River to the Alaska-Yukon border. Coho are extremely adaptable and occur in nearly all accessible bodies of fresh water, from large trans-boundary watersheds to small tributaries.

The status of coho populations in the California and the Pacific Northwest varies; some are healthy and robust while one is listed as endangered and three are considered threatened under the Endangered Species Act. Coho salmon populations in Alaska are healthy.

Over the longer term, the natural production of this species, particularly in the southern portions of its range, will continue to be challenged by freshwater environmental change brought about by increasing human development and climate change. Populations at lower latitudes will likely continue to experi¬ence greater variability in both smolt production and marine survival compared with Alaska’s populations. Re¬cent declines in hatchery production combined with environ¬mental and management changes make it unlikely that the Pacific-wide commercial catch will rebound to levels in the mid-1960s to mid-1990s that routinely exceeded 10 million fish annually. Alaska’s coho population is expected to remain healthy.

Coho salmon on the west coast of the United States have experienced dramatic declines in abundance during the past several decades as a result of human-induced and natural factors. Water storage, withdrawal, conveyance, and diversions for agriculture, flood control, domestic, and hydropower purposes have greatly reduced or eliminated historically accessible habitat. Physical features of dams, such as turbines and sluiceways, have resulted in increased mortality of both adults and juvenile salmonids.

Natural resource use and extraction leading to habitat modification can have significant direct and indirect impacts to salmon populations. Land use activities associated with logging, road construction, urban development, mining, agriculture, and recreation have significantly altered fish habitat quantity and quality. Studies indicate that in most western states, about 80 to 90 percent of the historic riparian habitat has been eliminated. Further, it has been estimated that during the last 200 years, the lower 48 United States have lost approximately 53 percent of all wetlands. Washington and Oregon's wetlands have been estimated to have been diminished by one third, while it is estimated that California has experienced a 91 percent loss of its wetland habitat.

Salmon have been, and continue to be, an important target species for recreational fisheries throughout their range. During periods of decreased habitat availability, the impacts of recreational fishing on native anadromous stocks may be heightened. Commercial fishing on unlisted, healthier stocks has caused adverse impacts to weaker stocks of salmon, and illegal high seas driftnet fishing in past years may have also been partially responsible for declines in salmon abundance. Introduction of non-native species and modification of habitat have resulted in increased predator populations and salmonid predation in numerous river and estuarine systems.

The commercial catch of coho salmon has increased significantly from low catches in the 1960s, reaching 9.5 million fish in 1994. About half the commercially harvested coho were taken in Southeast Alaska, primarily by the troll fishery.

Coho salmon are utilized across the state of Alaska for subsistence needs.

The coho salmon is a premier sport fish and is taken in fresh and salt water from July to September. In 2005, anglers throughout Alaska caught 1.4 million coho salmon. In salt water they are taken primarily by trolling or mooching (drifting) with herring or with flies or lures along shore. In fresh water they hit salmon eggs, flies, spoons, or spinners. Coho are spectacular fighters and the most acrobatic of the Pacific salmon. On light tackle, coho provide a thrilling and memorable fishing experience.