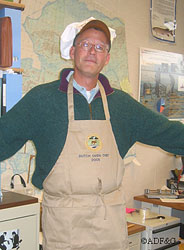 Charlie Swanton shows off the trophy apron, won in the 2005 Fairbanks ADF&G Dutch Oven Cook-Off for this salmon recipe.

When finished layering ingredients, dot top of potatoes with butter and pour in milk.

Hint: It really is best after cooling overnight and heated in microwave.