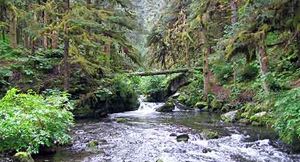 The Kodiak Remote Zone, which includes the remainder of the island outside the road zone, provides opportunities for all five species of Pacific salmon as well as Dolly Varden, rainbow trout and steelhead. Most visitors are looking for chinook, silver, and red salmon as well as steelhead. The remote zone is served almost exclusively by small aircraft and boats. Many remote zone streams have a greater flow, less brush and debris, making them better suited for watercraft access. Remote Zone salmon runs begin in some areas in mid-May and continue through October in many places.

Because of a relatively high demand for guided fishing services in the remote zone, it is advisable to make arrangements six months to a year in advance of trip dates. Lodging accommodations should also be made well in advance of planned trip dates. Most anglers use one of Kodiak's many small aircraft charter services, or arrange air travel in advance with the lodge owner or guide service.

The majority of anglers use one of Kodiak's many small charter services. Air travel should be arranged in advance with the lodge owner or guide service.

The Kodiak Island road zone is outlined in the map shown but is generally east of a line from Craig Point south to the westernmost point of Saltery Cove, including freshwaters of Woody and Long island. Saltwaters included in Road Zone regulations are bays and inland areas following the shoreline of the Road Zone and are also outlined in the map shown. The road zone has approximately 70 miles of paved and hard-packed gravel roads crossing 10 significant streams and provides access to over 17 stocked lakes. A 13-mile gravel road leading to Saltery Cove requires 4-wheel-drive or use of an ATV.

Hip boots or chest waders are highly desirable while wading, which often provides the best access to the fish. Upstream of low-lying coastal areas, most road system rivers are braided, fast flowing, shallow and generally unsuitable for rafts, canoes, or other personal watercraft. However, a number of road-accessible lakes, such as Buskin, Kalsin Pond and Lake Rose Tead, which borders the Pasagshak State Recreation Area, are well suited for small rafts and float tubes.

Regulations on the road system differ slightly from Kodiak's Remote Zone, so check the regulations carefully. 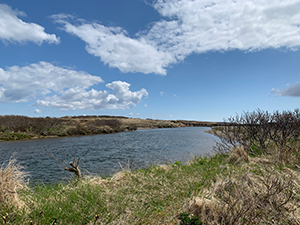 The Alaska Peninsula and the Aleutian Islands chain cover a vast area with numerous rivers and lakes, many of which are unnamed. The area is remote, expensive to access, and the weather can be extreme, but the beauty, wildlife and fishing are spectacular. All five species of Pacific salmon return to some of systems on the Peninsula as do steelhead, wild rainbow trout, Dolly Varden, grayling and artic char. Access to these areas can be difficult, and few services are generally available. Many anglers wishing to experience fishing in this area contact a guide service.

The Alaska Department of Fish and Game operates weirs on seven rivers (McLee's, Sandy, Ilnik, Chignik, Nelson/Sapsuk, Bear and Orzinski rivers) within the Alaska Peninsula and on Unalaska Island. The purpose of a weir is to identify and enumerate species of anadromous fish during their upstream migration and the seaward migration for Dolly Varden and steelhead. Weirs are just one of the tools the department utilizes to monitor escapement in order to manage the commercial, sport and subsistence fisheries. You can search the salmon escapement database for these rivers.

Southwest Alaska is a land of extreme climatic conditions. The Aleutians and Peninsula are open to the storms of the Bering Sea and the Gulf of Alaska yet block the rest of the region from the moderating maritime effects. The area is prone to winds and long drawn out periods of rain. Temperatures are cool, general in the 40's to 70's in the summers and colder in the winter. Any time of the year, be sure to bring the best rain gear you can find. The fall season is the wettest time of the year.

In early spring wild rainbow trout, steelhead, Dolly Varden and artic char can be found. Chinook salmon run early June to the end of July. Sockeye salmon start returning to rivers in early June through mid-August, and on Bear River through the month of September. Chum and pink salmon run the months of July and August. Lastly coho salmon return mid August into October.

Remote opportunities for freshwater king salmon fishing along the Alaska Peninsula are available in a number of locations, including the Chignik River on the Gulf of Alaska side and also in several streams draining into Bristol Bay between the villages of Port Heiden and Nelson Lagoon. The Nelson, Sandy, Cinder, Bear and Meshik rivers all support relatively small returns of king salmon.

Little is known about the abundance and location of rainbow trout and Steelhead populations in the Aleutians or in streams along the Alaska Peninsula draining into the Gulf of Alaska. These populations are some of the most remote and less fished.