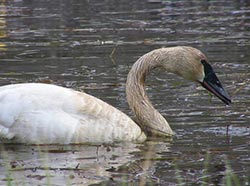 The Swanson River road reaches 17.5 miles north into a forested, lake-rich section of the Kenai National Wildlife Refuge; the road ends at the Swanson River. Moose can often be seen feeding along the road early and late in the day. Roadside access to nine different lakes offers a chance to see common loons and other waterfowl. Look for a nesting pair of trumpeter swans on Dolly Varden Lake. Watch for beavers swimming across lakes late in the evening. Listen for thrushes, warblers, woodpeckers and other forest birds in the mature stands of spruce. In the early spring, boreal, great horned and saw-whet owls can be heard calling from the older stands of spruce and birch. Along the Swanson River, look for spotted sandpipers and other shorebirds, and waterfowl such as green-winged teal. Bears meander through the area, with black bears more frequently seen along the road. Look for scat laced with berries and grass stems. Emerald dragonflies thrive in the marshy lake and river edges.

The road traverses a myriad of habitats, from a mature mixed forest of white spruce, birch and cottonwood to brushy stands of alder and willow. Wetland and bog fringe many lakes, punctuated by stands of black spruce. The interconnected lake system supports resident fish and waterfowl.

Modern Alaska’s first major oil strike occurred in the Swanson River field just to the west in 1957, and the area remains a major producer of oil and gas. Oil field roads are closed to public vehicle access.

Drive the road slowly, early in the morning, and stop at pullouts and trailheads, or take side trips to lakes. Listen for owls in the early spring. One-half mile before the Swanson River, the Swan Lake Road continues another 12 miles to the east, offering an opportunity to go deeper into the refuge. Swanson River and Swan Lake Roads are primary gateways to the Swan Lake/Swanson River canoe trails.

Watch for industrial traffic from the oil field from the access road at mile 14.7.