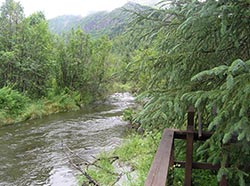 Moose Creek flows into Trail Lake, serving as one of the headwater streams for the Kenai River and its immense run of sockeye salmon. By late July and early August, hundreds of adult salmon have run the gauntlet of human and non-human predators to reach their final destination in this stream that crosses and recrosses the Seward Highway. From a viewing platform in the woods, salmon can be seen sweeping redds (shallow nest depressions) in the gravel with their tails. Watch for Dolly Varden and rainbow trout attending the spawners, seeking eggs and flesh. Bald eagles and common mergansers feed on the rich bounty. Black and brown bears often work the creek for carcasses and can sometimes be seen from the platform. The spruce and birch forest along the creek supports forest birds, including thrushes, flycatchers, warblers, woodpeckers, and chickadees. The old bridge at the creek’s mouth offers another view of the spawning stream and the lakeshore.

The Cook Inlet Aquaculture Association’s Trail Lake Hatchery is a central incubation facility that releases up to 19 million sockeye salmon and one million coho salmon to systems outside the Kenai drainage each season.

Stop by the viewing deck in late July and early August, after the fish begin arriving in high numbers. Visits in May and June might pay off with nesting bird sightings.

Wear polarized glasses to penetrate the glare on the creek surface.

Watch closely for the unmarked turnout to the west at Seward Highway milepost 32.5. Park in the double ended pullout on the west side of the road and walk a few hundred yards along the path to the viewing deck.