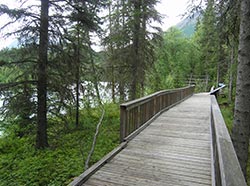 Make connections between wildlife and Alaska’s original residents. The Dena’ina Athabascan Kenaitze Indian Tribe offers visitors a glimpse of its culture, plant lore, wildlife use and other traditional ecological knowledge at a visitor center and a riverside boardwalk with many interpretive displays. Learn how Natives traditionally used the river and forest resources as their “grocery store,” finding food, medicine, housing materials and tools in the region’s wild resources. See the remains of a house pit and replicas of a fish drying rack. Alaska Native reverence for salmon and other animals is shared through displays. Explore a mixed white spruce, birch and cottonwood forest and view the Kenai River from inside the woods. Bald eagles nest in cottonwoods just across the river, and pine siskins, dark-eyed juncos, chickadees and other forest birds wander the trees. Moose are sometimes glimpsed in the parking lot, feeding on willows and alders.

The Dena’ina Athabascan people lived in the Kenai River Valley, relying on its fish, game and plants for food and its trees for shelter for more than 1,000 years before European settlement.

Sterling Highway milepost 52.6, directly across from the Russian River Campground.

The site is open seven days a week, May through September, mostly in the afternoons. Call the Kenaitze Indian Tribe at 907-283-3633 for specific hours, tour schedules and special events. www.kenaitze.org/KBeq