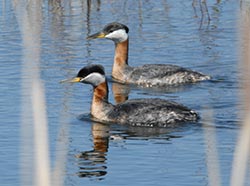 Hidden Lake extends eight miles into the foothills north of Skilak Lake. In June, sockeye salmon smolts gather in the lake by the hundreds of thousands before migrating down Hidden Creek to Skilak Lake. Up to 30,000 adults return to spawn in June and July. Brown and black bears meander through the dense growth along the creek south of the lake. Hike the 1.2-mile (round trip) Burney’s Trail slowly with ears open for the songs and calls of hermit and Swainson’s thrushes, boreal chickadees, and red-breasted nuthatches. Walk along the lakeshore to the mouth of Hidden Creek to catch a glimpse of muskrats and moose, and to watch yellow-rumped (myrtle) warblers snatch insects from the air.

The trail and lake are surrounded by a young mixed forest of spruce and aspen. Pockets of marsh surround the deep, cold lake.

The lake follows an ancient channel of the Kenai River.