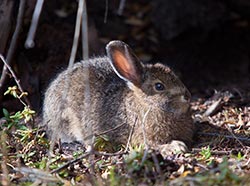 Eureka Summit is the highest point on the Glenn Highway. Look for signs of the Nelchina caribou herd, which can be seen in this area typically during July and early August (hunting begins August 10th). The site offers 360 degree views of four mountain ranges: the Chugach Mountains to the south, the Talkeetna Mountains to the north, the Alaska Range to the northeast and the Wrangell Mountains to the east. 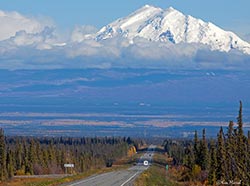 Coming into Glennallen with Mount Drum in the distance

The Lake Louise Road turnoff is on your left as you are heading east. The road continues about 20 miles up to Lake Louise but a number of small ponds along the way often have nesting trumpeter swans and various other waterfowl, which are present all summer. Migrating trumpeter and tundra swans concentrate in this area in late September and October, often in the same groups, (listen for their unique sounds). While not a major flyway, migrating Canada Geese can also sometimes be seen and heard in September and October as well.

The town of Glennallen is spread along the last few miles leading up to the junction of the Glenn and Richardson Highways. The town has traveler services available due to its strategic location. It also serves as a fly-in base for many guides and outfitters. Less than a quarter mile south of the Glenn/Richardson Highway junction is a small pond that generally has a wide variety of waterfowl species in early summer May through June. Various species of ducks can be seen through September. 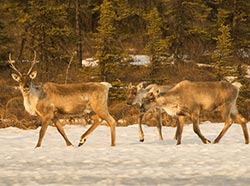 If you are travelling along the Glenn Highway to Tok (aka Tok Cutoff), look for moose and waterfowl in the vicinity of the Slana River (about 15 miles past Nabesna Road) and again a little further north in at Mineral Lake.