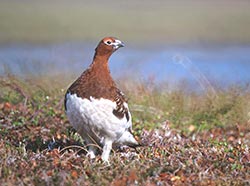 Townsend’s warblers and both species of kinglet nest in the forest around the lower portion of the trail. Compare the songs of varied, Swainson’s and hermit thrushes in the mixed forest in early summer. Moose browse in openings. Black and brown bears traverse the trail and may be seen at any time. Watch for scat with berries and grass stems in it. In Lower Fuller Lake, feeding grayling dimple the lake surface in the evening, while beavers leave v-shaped wakes. Glass the mountainsides for Dall sheep. Open tundra with easy off-trail hiking begins at Upper Fuller Lake, offering a chance to view Dall sheep more closely and to find alpine-nesting birds such as willow ptarmigan and American pipits.

Fuller Lake Trail, a popular but strenuous hike, leads to some of the oldest trees in the area. According to core samples taken by federal biologists, some of the mountain hemlocks growing near tree line at Upper Fuller Lake sprouted in the 1500s.

Walk the trail slowly and listen for bird songs in the tall trees. Don’t be put off by the initially steep stairway at the trailhead; the trail levels off gradually in the forest.

Wear long sleeves and pants in late summer to limit exposure to overhanging cow parsnip. Also called wild celery, this plant contains an oil that can cause burn-like skin blisters, especially when activated by sunlight. If you are exposed to these oils, wash the affected area as soon as possible to reduce your risk of blisters.

Fuller Lakes trailhead is on the north side of the Sterling Highway at milepost 57.