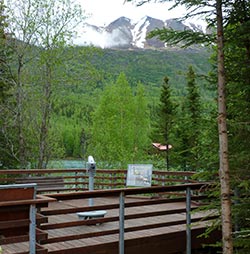 From the viewing decks at Cooper Landing boat launch, overlooking the very beginning of the Kenai River, viewers can spy Dall sheep on the alpine meadows to the north and mountain goats on the more rugged and steeper slopes to the south. Waterfowl and shorebirds appear along the river. Look for mergansers and other ducks paddling in the shallows, and for gulls, terns and bald eagles perched in the trees or soaring over the water. The alders and willows near the boat launch and wayside draw many species of forest songbirds including yellow-rumped, orange-crowned and Wilson’s warblers.

Riparian zones follow the Kenai River and fringe the lower reaches of Kenai Lake. Mixed white spruce and paper birch forest with alder and willow thickets lines the shoreline. Alpine tundra and cliff habitat can be seen on the mountains overlooking the valley. The warmer waters of Kenai Lake keep the outlet area ice-free most of the year, supporting a late run of coho salmon.

Look for mountain goats and Dall sheep along the green-up line that progresses up the mountain as spring and summer unfold. Other pullouts in Cooper Landing also offer good mountain views. Bring a spotting scope if possible.

A 250 foot boardwalk connects parking, toilets and the boat ramp. The boardwalk has a maximum gradient of 5%. There are also viewing areas and interpretive displays. Pressurized water is available.

Sterling Highway milepost 48, turn north into the Cooper Landing State Recreation Site Boat Launch. If coming from the east, the right turn into the boat launch and viewing site comes up fast on the right a few hundred feet west of the Kenai River bridge.