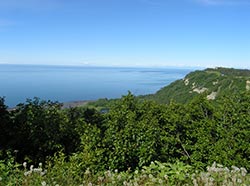 This wayside on the hill overlooking the Homer Spit and Kachemak Bay is the best place to take a postcard snapshot of Augustine Volcano. The panoramic vista of lower Cook Inlet also offers a chance to scan for congregations of humpback whales, harbor seals, Steller sea lions and sea otters from an almost aerial vantage. On calm days, watch for the white puffs of whale exhalations, called blows, and the dark figures of otters and seals. Use binoculars or a spotting scope. Watch for bald eagles drifting by on thermals and black-billed magpies fluttering in the trees below. In the spring, track flocks of migrating birds through binoculars as they wheel across the sky.

The immediate vicinity features alders and brush typical of steep slopes and disturbed sites. The general area lies within an upland and somewhat dry spruce-birch forest. Kachemak Bay, spread out below, includes some of the most diverse and bountiful ocean habitat in the world.

Augustine Volcano is an active volcano, with ten eruptions in the 1900s. Information on Alaska’s volcanoes, including the latest activity, can be found at www.avo.alaska.edu.

In spring and summer, ravens and eagles play in the updrafts along the cliffs here. It’s a great place to watch flips and rolls and other avian aerobatics.

Be prepared for wind even on clear days. Stay away from the rim of the bluff.

Sterling Highway milepost 169.6. Watch for the signed wayside on the bay side of the road. Homer lies about two miles further down the hill.