Snaring is an effective method to catch wolves and is a preferred method for Alaskan trappers. However, wildlife managers and trappers are concerned about the accidental capture of moose in wolf snares. Alaska Department of Fish and Game (ADF&G) biologists estimate that in areas with heavy trapping pressure, wolf snares catch up to 1% of the moose annually. Most moose caught in wolf snares die either at the capture site or subsequent to release.

By studying how moose encounter a wolf snare, Gardner found that incorporating two modifications to the snare resulted in fewer moose catches and fewer injuries to moose while reliably retaining wolves. Both modifications can easily be made by trappers or a commercial snare company on any wolf snare cable size between 3/32" and 1/8".

An additional benefit of the new design is that the breaking force increases as the snare loop becomes larger, meaning that larger wolves will have to exert more force to break free with the noose stop/breakaway system.

This is not the case for breakaway mechanisms that are dependent on the lock separating or S hooks pulling apart in which the breaking force is the same for moose and wolves. However, an S hook is an efficient breakaway mechanism and can be incorporated with a noose stop minimizing the chance of injury until the moose can break free. 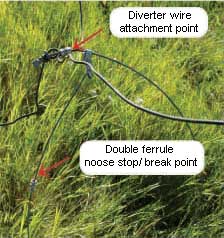 The breakaway portion is created by cutting the snare within the loop at 10.5" from the cable end stop and inserting a 3/32" double ferrule on 3/32" snare cable, or 1/8" double ferrule on 7/64" and 1/8" snare cables. The ferrule is then attached using the corresponding size swage tool. If a different breakaway system is used i.e. S hook or a modified end stop, only a stop needs to placed at the same location but the cable does not need to be cut. When using a noose stop, do not rely on a split lock design as the breakaway mechanism. It does not work because the lock has to spread to the size of the noose stop before releasing.

A Note On Loop Size

Gardner’s research also compared accidental moose catch rates between 60" and 72" snare loops. Assuming that both size snares are set with the bottom of the loop 18" above the terrain, the top of a 72" loop is 3"(or more) higher than the top of a 60" snare. When walking, moose carry their head about the height of a wolf snare.

Where To Get The Materials

All tools and materials necessary to construct these snares can be purchased locally or through mail order suppliers. These snares may also be purchased preconstructed. Check the Alaska Trapper Association website for locations.