Sharp-tailed grouse often perch high in an Alaska spruce tree, or emerge from dense brush along a back road. This grouse occupies a vast area of primarily forest habitat from Ontario to Alaska, far north of the prairie border with which people usually associate it. In these subarctic regions the sharptail prefers recent burn areas, open grass-shrub habitat, agricultural lands, sparse shrub-spruce at timberline, and wet, sedgy, almost treeless areas known as muskegs. Sunny, grassy knobs are important features of breeding grounds. Dwarf birch bushes on which they feed are an important component of their winter range. Sharptails will also feed in unharvested grain fields in central Alaska, as long as the grain shows above the snow. 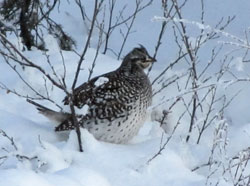 Sharp-tailed grouse are distinguished from other grouse species by their silver-gray “frosty” appearance and white-spotted wings, but the most distinctive field mark is the short, pointed tail.

Male sharptails, which weigh about 2 pounds when mature, are slightly bigger than females. The two sexes look very much alike, except that the central pair of tail feathers of the male is usually striped longitudinally rather than crossbarred as in females, and the cock’s crown feathers are dark without bars.

The close kinship of sharp-tailed grouse and prairie chickens is obvious when courting time rolls around. Both species court in communal dancing grounds, called “leks,” where dominant males strut with fanned tails and drooping wings, “dance” on stiffened legs, hoot, and make a rattling sound by rapidly moving their tail feathers, all in an effort to get the attention of the hens. No other Alaskan grouse has such a courtship pattern. Late April through early May is the best time to look for sharp-tailed grouse on their dancing grounds in Interior Alaska. Activity is at its peak within an hour of sunrise. Sharptails in the Tok area of eastern Alaska habitually court along roadsides, making observation and photography possible.

Male sharptails mate with several females on the dancing ground, and a hen may mate with more than one cock. Hens take on the task of incubating eggs, usually eight to twelve, and rearing the young. It is doubtful that males even know where the nests are, as hens often choose a place far from the courting area.

During Alaska winters sharp-tailed grouse rely heavily on dwarf-birch catkins for food, varying their diet when they can with grass seeds, waste barley, and overwintering berries. In the spring they are often observed ‘budding’ in young aspen trees. At this time they also feed on overwintering berries (especially kinnikinnick) and emerging green leafy vegetation. In summer, green leafy vegetation and insects are important food sources. In years when grasshoppers are abundant, sharptails often feed exclusively on them while they are available. The crops of sharp-tailed grouse taken in September usually hold kinnikinnick berries, lowbush cranberries, blueberries, grains, and various leaves and leaf fragments.

Although good records are rare, Interior Alaska apparently had good populations of sharp-tailed grouse in the 1920s and 1930s. Perhaps this period of abundance was related to the widespread wildfires that swept repeatedly over huge sections of the Tanana and Yukon valleys after the turn of the century. Sharptails thrive in the early years after an area burns (when grasses and shrubs dominate), only to decline again when trees close in and the ground cover changes. In the 1950s and 1960s numbers were much lower. Since then, large agricultural projects and numerous wildfires in Interior Alaska have resulted in improved habitat and increased numbers of these birds.

Although the sharp-tailed grouse is not widespread in Alaska, some places are locally known for their consistent production of coveys of this bird. The area around Tanacross, Tok, and Northway and the agricultural area east of Delta Junction are two such hot spots. The brushlands from Shaw Creek to Delta Junction and from Delta Junction to Donnelly Dome support smaller populations. The open marshy ground near Fort Wainwright and North Pole is an area where these birds are often seen. Sharptails are also scattered along high, fairly open ridges west of Livengood, the road to Manley Hot Springs, on the Johnson Road south of Eielson Air Force Base, on other summits or “domes” in the vicinity of Fairbanks, and along the Lake Louise Road west of Glennallen.

Range of the Sharp-Tailed Grouse in Alaska

The Interior valleys and their foothills harbor practically all of Alaska’s sharp-tailed grouse, although small populations occur in the western Copper River Basin. The subspecies found in Alaska also lives in the Canadian provinces of Yukon and extreme northern Alberta. Six other subspecies occupy lands extending east across central Canada to the Great Lakes region, and south to Nebraska, New Mexico, Nevada, and Oregon. The sharptail is very much like the more southerly prairie chicken; in fact, the two birds occasionally hybridize.

The shaded portion of the map indicates areas Sharp-Tailed Grouse are found in Alaska.