In Alaska, Steller sea lions range from southeastern Alaska north and west through the Gulf of Alaska, along the Aleutian Islands chain and into the Bering Sea. They are currently listed as endangered in their western Distinct Population Segment (wDPS) and have been delisted from their former threatened status in their eastern DPS. These populations are divided at Cape Suckling, Alaska, which lies between Prince William Sound and Yakutat. In the wDPS, sea lion numbers declined between the 1970s and 1990s. The overall decline ceased in 2000-2003, with modest increases east of Samalga Pass while declines continued to the west. Meanwhile the eDPS has steadily increased at approximately 3% per year.

Steller sea lions occur at over 300 haulouts and breeding rookeries (in red) across the northern Pacific Rim from the Kuril Islands to California. Within the United States, the population is divided at Cape Suckling into western and eastern Distinct Population Segments. 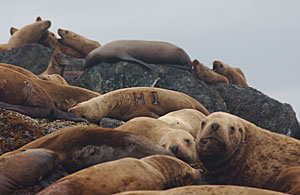 During skiff and land surveys, persistence is required to identify and photograph marked sea lions from among the hundreds of others hauled out. By re-visiting these locations year after year, we can identify individual sea lions to determine, over time, the rate of survival, the reproductive rates and time at first reproduction of females, their geographic shifts in choice of breeding rookery and rates of entanglement in marine debris. As an example, this female sea lion was marked as a pup at Hazy Islands rookery in 2001 and resighted at the Inian Islands in 2003. She eventually went on to produce a pup at her birthplace in June 2009.

ADF&G, MML and the Alaska SeaLife Center have permanently marked, by hot-branding under anesthesia, sea lions for individual identification at rookeries throughout Alaska. Every summer, these agencies follow up on this work by conducting brand-resight cruises during which nearly every sea lion haulout and rookery in Alaska is visited by biologists in small skiffs. We resight animals during other seasons for specific projects or opportunistically during other types of fieldwork. During these skiff and land-based surveys, biologists conduct counts, photograph branded animals, and collect behavioral data (for example, whether a female has a nursing pup or an adult male is defending a territory). Resightings of branded individuals are used in mark-recapture models to estimate survival, reproductive rates,the age of weaning and other life history variables. 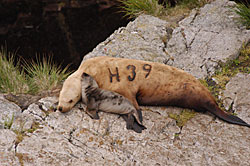 A female originally marked as a pup at Hazy Islands rookery in June 2001 is resighted with her own new pup at Lowrie Island rookery in June 2009. Mark-resight work shows us how often sea lions produce pups and at what age they begin.

If you see a branded sea lion, we'd like to hear from you! Photographs of the sea lion and its brand, the date, and location are very valuable pieces of information that we can use. Photographs of branded sea lions that are entangled by marine debris, suckling their pups or nursing from their mothers are also valuable.

Please keep in mind the Marine Mammal Protection Act prohibits anyone from disturbing marine mammals unless authorized by NOAA permit, and it is wise to keep a distance of 100 yards between yourself and sea lions on their haulouts.

Please send photos along with date, specific location, and your contact information to dfg.dwc.sealions@alaska.gov. Thank you!