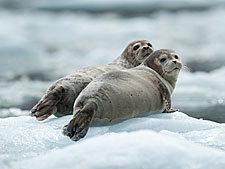 The population abundance of harbor seals declined dramatically in Prince William Sound, the Aleutian Islands, and around Kodiak Island beginning in the late 1970s through the early 1990s. During this same time period, abundance remained stable or increased slightly in the Ketchikan and Sitka regions of Southeast Alaska. Currently, harbor seal numbers appear stable or are increasing in Southeast Alaska, with the exception of a precipitous decline in Glacier Bay documented since surveys were initiated in 1992 and ongoing through 2008. Harbor seals numbers in the Kodiak area have been increasing since the early 1990s, while in Prince William Sound seal numbers did not show signs of stabilizing and subsequent increase until 2002.

Monitoring of harbor seal population trends in selected areas throughout their geographic range in Alaska has been an important objective of the harbor seal research program at the Alaska Department of Fish and Game (ADF&G) for decades. Recently, we have collaborated with the National Marine Mammal Laboratory (NMML, NOAA Fisheries) to combine resources and develop/implement new methods to better achieve NMML’s objective of estimating harbor seal population abundance, and ADF&G’s objective of monitoring population trends throughout the seals’ range in Alaska. Currently NMML conducts the surveys and both agencies share data to estimate abundance and trends. This important collaboration allows ADF&G more time to focus our research toward gaining a better understanding of harbor seal ecology (including diet, dive behavior and movements, and habitat use) and population dynamics (e.g., assessing survival and reproductive success through photo-identification of individuals and radio telemetry). Various health and condition parameters, along with genetics, diet and diving data, are compared among areas to understand what factors may be contributing to the different regional population trends. Although based on a species-specific approach, ADF&G’s efforts are helping to identify how harbor seals fit into the marine ecosystem, including how they interact with their prey, predators, and other species competing with seals for the same food.