History of Bison in Alaska 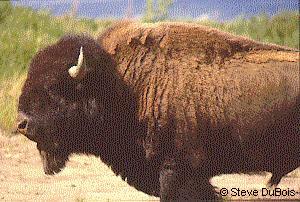 Bison colonized North America after migrating from Asia to Alaska over the Bering land bridge several hundred thousand years ago. They were one of the most abundant large mammals in Alaska for most of the last 100,000 years. Large-horned forms such as steppe bison (Bison priscus) once roamed Alaska in the company of now extinct mammoths, mastodons, horses, lions, sabre-toothed tigers and dire wolves, as well as moose, caribou, Dall sheep and muskox. Large-horned bison evolved into modern small-horned bison (Bison bison) between 5,000 and 10,000 years ago. Wood bison (Bison bison athabascae) were the last native bison to occur in Alaska. They became extinct in Alaska during the last few hundred years, most likely because of hunting and changes in the distribution of habitat. Bison once inhabited a large region in Alaska including the Delta River near the community of Delta Junction, Alaska.

In 1928, 23 bison from the National Bison Range in Moiese, Montana were transplanted to their historic range along the Delta River. By 1947 the herd of plains bison had increased to 400 animals. Beginning in 1951, hunting was allowed and is currently used to limit the herd to a precalving population of 275–300 bison. The herd is maintained at this level to reduce the potential for damage to agricultural crops and to keep the herd within the carrying capacity of its summer range. 15,000–20,000 people apply each year for 80–120 permits to hunt Delta bison. Delta bison have been used to start three other herds in Alaska.

Bison and Agriculture in the Delta Junction Area

Delta bison began to use hay and cereal grains for part of their fall and winter feed when farms were developed in the herd's traditional winter range. Most crop damage occurred when bison fed in farm fields prior to fall harvest. Problems began in the 1950s, continued through the 1970s, and escalated with development of the Delta Agricultural Project in 1979. 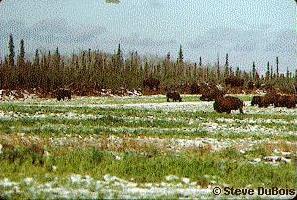 In 1979, the Alaska Legislature established the 90,000-acre Delta Junction State Bison Range. The purpose of the bison range was to perpetuate free-ranging bison by providing adequate winter range and to alter seasonal movements of bison to reduce damage to agriculture. However, no money was appropriated for bison range development, and only small scale habitat development was initially possible. As the Delta Agricultural Project was developed in the early 1980s, conflicts between bison and agriculture increased. Because both bison and agriculture are important to Delta Junction, the community became concerned with the growing problem. The community urgently requested a special appropriation from the Alaska Legislature to fund bison range habitat development. In 1984, the legislature approprated $1.54 million for bison range development and increased the bison hunt application fee from $5 to $10. Funds from the fee increase were for management of the bison range.

Large scale forage development began on the bison range in 1985. Approximately 2800 acres of land were cleared and planted with the perennial grasses, nugget bluegrass and arctared fescue. Current management is limited to income from Delta bison hunting application fees and is approximately $50,000 annually. With these funds, the Department of Fish and Game provides six months salary for the Bison Range Manager, fertilizes 500 acres of forage annually, manages forage with techniques such as controlled burns, and conducts small scale equipment maintenance. The biggest challenge for the bison range at this time is controlling the invasion of the native grass, bluejoint reedgrass (Calamagrostis canadensis). Bluejoint is a major threat to successful bison forage management.

During the fall migration, bison now leave the Delta River and migrate directly to the bison range instead of migrating to the Delta Agricultural Project as in the early 1980s. Bison damage to farms was significantly reduced in 1985 with the first substantial habitat development on the bison range. Continued development in 1986 and 1987 resulted in no fall crop damage those years. The legislative appropriation has also allowed the Department of Fish & Game to purchase farm equipment for forage production, develop bison watering sites, construct an equipment storage building, hire bison range staff, and related projects.

Other Uses of the Bison Range

The bison range is managed for a wide variety of public uses. Public groups are encouraged to use the range if the use is compatible with bison management. For example, the 1987 Alaska State Blackpowder Rendezvous was held on the bison range during three days in July. The bison range is also used for timber sales, hunting, cross-country skiing, agricultural research, dog sledding, trapping, wildlife viewing, fishing, and other activities.

The bison range starts about 12 miles southeast of Delta Junction on the Richardson Highway. During the spring and summer, motorists driving the Richardson Highway from Delta Junction to the Black Rapids Glacier may spot bison along the Delta River. The best viewing on the range itself is from mid-July to mid-September. Binoculars are helpful. Wildlife watchers may also see moose, black bears, coyotes, waterfowl, grouse, and other birds.

Economic Impact of the Bison Range

The bison herd and Delta Junction State Bison Range make an important contribution to the economy of Delta Junction. About 40 hunting parties travel to Delta Junction each year to hunt bison. Each group spends about $300 in the community on lodging, gasoline, meals, and groceries. In addition, the bison range appropriation has been used to pay nearly $1 milliion to local businesses for habitat development. Salaries for bison range staff have also contributed to the local economy.

The Future of the Bison Range

The bison range has benefitted the Delta bison herd, farmers, and the community of Delta Junction. If the bison range and the $10 bison hunting application fee are retained, the range will be increasingly effective in providing fall and winter bison forage, contributing to the local economy, and providing public recreation for Alaskans.