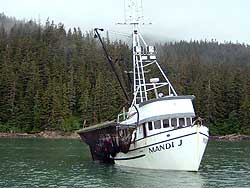 The F/V Mandi J getting ready to deploy a beam trawl.

In 2001, ADF&G shellfish biologists observed onboard several commercial beam trawl shrimp fishing vessels. The objectives of observing onboard beam trawl vessels were to: 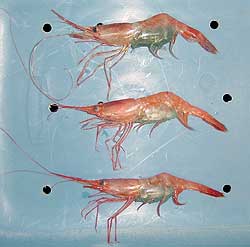 The beam trawl onboard observer program was curtailed in 2004 due to insufficient Department resources and sharp declines in beam trawl effort in response to very poor market conditions.

Due to the current small fishing effort there is currently no dockside sampling program for the trawl shrimp fishery. However, in the past data collected during dockside sampling was used to generate catch size frequencies. This data was used in the management plan for the fishery, and is useful for evaluating year class cohorts.