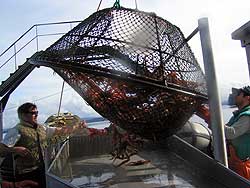 A pot is emptied onto the sorting table of the R/V Medeia during the fall Tanner crab survey.

The pot survey for Tanner crab, Chionoecetes bairdi, has been conducted annually in Southeast Alaska by the Alaska Department of Fish and Game since 1997. The survey covers 14 areas throughout Southeast Alaska, and is split into five trips. Three trips are conducted in June and July and are primarily focused on Red King crab assessment, while two Tanner crab-focused trips occur in October.

For each survey area, 88-in diameter conical crab pots are set at randomly determined locations within density strata. Pots are soaked for 18 to 22 hours.

The survey data is used to assess the status of commercially important Tanner crab stocks in Southeast Alaska, by survey location. The goal of the survey is to produce unbiased estimates of catch per unit effort (CPUE) by recruit class in order to 1) determine stock health by survey location and 2) provide input data for a three-stage catch-survey (C-S) model. The C-S model is used to estimate mature and legal population size while the stock health by survey location determines the appropriate mature harvest rates. This information is used to produce an annual biological recommendation on the amount of harvestable surplus, or guideline harvest level (GHL). This provides for sustainable harvest of stocks and minimizes the risk of recruitment failure––as mandated by the Alaska Board of Fisheries’ “Policy on King and Tanner Crab Resource Management” (Hodson 1990). Other information currently used in the biological recommendation for the fishery includes Tanner crab catch in the red king crab pot survey, and catch and effort data reported on fish tickets. 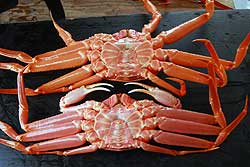 The long term goal of the survey is to provide information on the spatial distribution and health of the stocks. Information produced by the survey to achieve these goals includes CPUE, stock composition, female clutch fullness, female maturity, male length/weight relationship, male chela height/carapace width relationship and visual detection of disease and limb loss.

Additional improvements to the Tanner crab stock assessment program are underway. More detailed understanding of the effect of bitter crab syndrome is a high priority, as is research into a biologically correct size at maturity for southeast Alaska. Harvest strategy modeling is needed to determine a biological threshold and appropriate harvest rates. 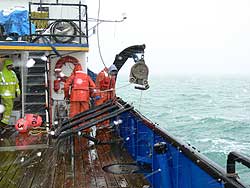 Reduced seasons with pot soak times as short as 3–8 hours have become common in the Southeast Alaska commercial Tanner crab fishery. Short soak times can increase handling of discarded crabs, resulting in injury, leg loss and mortality. Information on catch-at-time is necessary both to evaluate management options that may influence hauling frequency and to evaluate the necessity of standardizing annual Tanner crab pot survey CPUE.

Conical Tanner pots, with and without four 12 cm (4 ¾-in) diameter escape rings, were soaked for 3, 9, 18, or 24 hours in Icy Strait and Stephens Passage in 2004 and Icy Strait and Excursion Inlet in 2005. Soak time and escape ring treatments were randomly assigned to six 8-pot clusters in good Tanner crab habitat within each year/area combination.

Two-way ANOVA of escape rings and soak time and linear regression of catch versus soak time were conducted to test for statistically significant differences. 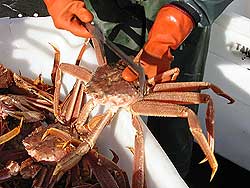 Thus, non-legal crabs were able to escape from pots with escape rings even when soak times were short. However, long soaks decreased the number of non-legals handled per constant number of legals. Tanner crab fishermen in Southeast Alaska use short soaks, even though long soaks will increase their CPUE, because the best economic returns over a short fishery are achieved by maximizing cumulative catch, not CPUE. Finally, Tanner crab survey CPUE should not be standardized for soak times from 9–24 hours. 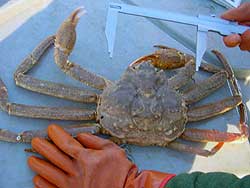 The data collected during dockside sampling are used to generate size frequencies by fishing area for the commercial Tanner crab fishery. Port sampling data is useful in determining stock composition and in evaluating whether the stock composition of the commercial catch mirrors the findings of the survey. Size frequencies and shell condition information is also useful for evaluating year class cohorts for areas not surveyed. Information on limb loss, disease, and carapace injuries is also useful for gauging overall population health.