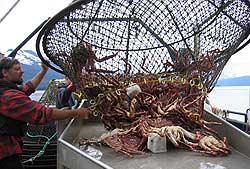 A pot is dumped on the sorting table during a red king crab survey aboard the ADF&G research vessel Medeia.

"The pot survey for red king crab, Paralithodes camtschaticus (RKC), in Southeastern Alaska began in 1978; significant improvements since its inception have decreased variability in catch per unit effort (CPUE) data. CPUE data is used to produce biomass estimates to establish the commercial guideline harvest level (GHL). The objectives of this report are to describe methods and findings of the 2010 red king crab survey.

The 2010 survey was conducted during three trips covering nine survey areas. For each survey area, 88-in diameter conical crab pots are set at randomly determined locations within density strata. Pots are soaked for 18 to 22 hours.

Stock health was assessed by comparing seven response variables from the current year’s data to long-term and short-term averages. Stock health is "poor" or “below average” in eight of nine surveyed areas. Three-stage catch-survey modeling methods were used to estimate legal (>178 mm carapace width) and mature (>129 mm carapace length) male biomass. The regionwide estimate of mature biomass is 0.81 million lbs, a 15% decrease from 2009. Because the harvestable surplus, at 25,597 lbs, is well below the 200,000-lb threshold in the red king crab management plan, there will be no 2010/11 commercial RKC season. 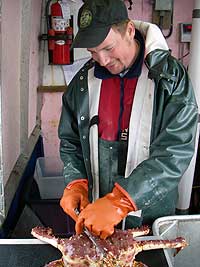 Additional improvements to the RKC stock assessment program are underway. Accurate harvest information for the personal use red king crab fishery is a high priority. Harvest strategy modeling is needed to determine a biological threshold and appropriate harvest rates. A cooperative industry and ADF&G study to verify survey and catch-survey population estimation methods is ongoing.

Despite a 5-year closure, the commercial RKC fishery remains well below threshold. It is important to understand the role of anthropogenic and environmental factors when formulating a management response. The improvements implemented to date and studies recommended above should help in sorting out their relative importance." 1

"The southeastern Alaska red king crab stock assessment survey provides an annual estimate of abundance and overall health of these stocks. The survey has historically sampled strata which are a mixture of both good and poor habitat, compromising the ability of directing pots to high abundance and variability strata. Geostatistical analyses were used to revise area stratification based upon the geographic distribution of previous survey catches, bathymetric data, and long-standing experience of industry. Nine survey areas were restratified into 5 abundance-based strata; Holkham Bay was restratified into 3 strata. From 22.4% to 44.0% of each survey area was designated as low abundance strata, averaging 30.4 %. A very small abundance of crab was expected in these strata. The remaining abundance estimates were assigned to the remaining four strata. Approximately 20%, 18%, and 14% of each area was designated as medium low, medium, medium high, and high abundance respectively.

Restratification of the survey areas improved the precision of catch rate estimates in 2005 for all areas except Juneau area. The number of pots that caught no red king crab decreased from 43% in the 202 to 2004 average to 26% in 2005. The coefficients of variation in catch estimates decreased an average of 29% for female and juvenile male catch, and 24% for mature male catch. The areas showing the largest improvement in precision were Pybus Bay, Seymour Canal, and Deadman Reach.

Boundaries of the five density strata used to establish pot locations during the red king crab survey in Deadman’s Reach of Peril Strait. 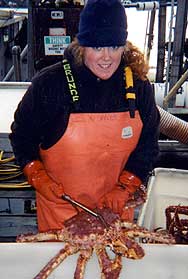 ADF&G distributed survey documents and related materials to the panel in early June 2005. Panelists and ADF&G personnel participated in the red king crab survey June 6–8 aboard the R/V Medeia in Holkham Bay, in order to become familiar with the survey. Panelists met in Juneau on June 27 for a presentation by staff and input from the Task Force and user groups. The panel subsequently met on June 28–29 for deliberation and drafting a response to questions. Various additions to the report were made through the end of 2005.

The Task Force and ADF&G staff developed six issues and questions for consideration related to: (1) survey pot locations, (2) survey pot gear, (3) survey timing, (4) survey bait, (5) stock assessment methodology, and (6) biological threshold and harvest rates. It became clear at the presentation meeting that observations of commercial harvesters do not match the trends from the stock assessment; harvesters believe that there are more crabs than the ADF&G assessment indicates. Therefore, it is of interest to determine whether the stock assessment methodology is providing useful scientific advice.

The panel reviewed written material and presentation given by ADF&G staff and industry. The panel requested additional information from shellfish biometrician Dr. John E. Clark. The panel used a Checklist for Stock Assessments (NR 1998) as one basis to evaluating the stock assessment approach. The panel also considered norms derived from the North Pacific Fishery Management Council and Alaska Board of Fisheries, fisheries management around the world, and scientific publications and practice. 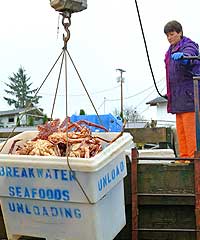 Red king crab from the F/V Frigidland, are landed in Wrangell.

The panel believes that the overall architecture of the survey and stock assessment of red king and Tanner crabs in Southeast Alaska is sounds: there is standard data collection, survey information, modeling, and harvest management. Nevertheless, the panel shares industry concerns over various aspects of the survey and stock assessment and recommends that improvements be made in all areas. In particular, ADF&G needs to establish better communication mechanisms to convey the rationale, justification, and results that lead to its management of this important resource." 3

The main goal of this research project is to ground-truth the current biomass estimate methods using two independent methods (depletion and mark/recapture) and provide new information to help us better understand red king crab (RKC) populations in Southeast Alaska. This is a collaborative effort between the commercial fleet and ADF&G. Based on the results of a 2009 pilot study in St. James Bay, a proposal for research was submitted, and subsequently funded by the North Pacific Research Board (NPRB) in May 2010. Research will be conducted in 8 survey areas throughout the Southeast region from Fall 2010 until completion in 2012.

The data collected during dockside sampling are used to generate size frequencies by fishing area for the commercial red king crab fishery. In combination with logbook data, the port sampling data is useful in determining stock composition and in evaluating whether the stock composition of the commercial catch mirrors the findings of the summer survey. Size frequencies and shell condition information is also useful for evaluating year class cohorts for areas not surveyed. Information on limb loss, disease, and carapace injuries is also useful for gauging overall population health.