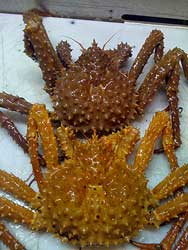 Golden king crab can be found in a range of colors, from dark brown to golden yellow.

Observing onboard commercial golden king crab vessels was initiated during the 1999/00 season with the purpose of collecting data from management areas that were not being sampled dockside. This program currently provides the only opportunity to collect data on sublegal and female golden king crabs, and to describe precise locations and depth of capture by size and sex class. During the 2008/09 season, 6 trips were conducted in 5 management areas, and 5,505 crabs were measured.

Observers close escape rings on up to 50 pots per trip to allow them to retain females and sublegals, however, both open and closed escape rings pots are sampled. Golden king crab carapace length is measured and shell age, leg condition, and presence of parasites are visually assessed; for females, clutch fullness, and development and condition of eggs are determined as well. Chela height is measured for a subsample of males. For each pot sampled, location, depth, soak time, debris, substrate, bycatch count by species, pot condition, pot type, pot dimensions and weight, escape device, and bait are recorded. 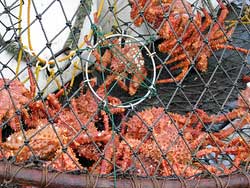 Escape rings are closed on some pots so that observer sampling can provide information on sublegal male and small female golden king crabs.

Because the size composition data collected while observing includes prerecruit males, it helps with early detection of trends in recruitment. In addition, chela height data collected will provide information specific to Southeast Alaska on the male golden king crab size of maturity. Other data collected includes pot locations, depth, bycatch, soak time, and gear configuration. Distribution data by size and sex class could be useful for determining survey strata boundaries and methods in the future. Data on fishing methods and gear should prove useful to managers, as they assess the impacts on the fishery of proposed management measures.

1Golden king crabs were tagged to estimate growth as the basis of a size limit. The abstract from the resulting publication (Koeneman and Buchanan 1985) states: 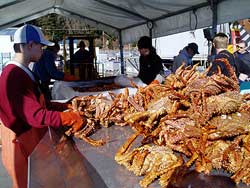 Recovery of golden king crab from this tagging program in the 1970s was accomplished during dockside sampling at commercial processing plants similar to this.

“A spaghetti isthmus tag was utilized to tag 899 male golden king crab, Lithodes aequispina, from commercial fishing vessels on various commercial fishing grounds of Southeast Alaska. Recaptures collected during the 1970 through 1976 commercial fisheries totaled 112, of which 45 were returned with information necessary to determine growth increments for one molt. Premolt size distribution ranged from 126 to 170 mm in carapace length. Average growth per molt was 16.3 mm, with a range of 7 to 21 mm for recaptures indicating one molt. Average time at large was 17.5 months, within a range of 10 to 33 months for one molt. Multiple molt data indicates 7 recaptures accomplished two molts, 2 recaptures accomplished three molts, and 1 recapture accomplished four molts. The largest growth recorded was 6 mm in 51 months by a recaptures with a premolt carapace length of 133 mm.”

Department personnel have sampled commercial deliveries of golden king crab dockside for carapace length, and shell condition at various ports throughout the region since 1970. Length frequency data are used to monitor recruitment trends and the relative contribution of various recruit-classes of crab. Department personnel began collecting average weight data dockside in 1975; this data provides additional insight into stock dynamics. In 1985, skipper interviews were initiated to provide an estimate of catch per unit of effort (CPUE).