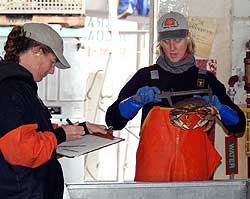 A Dungeness crab is measured by Alaska Department of Fish and Game technician Hilary Woods, as biologist Jan Rumble records data during a Dungeness crab survey on the Department’s R/V Kittiwake III. 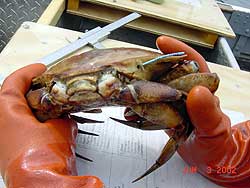 The Index-Removal method produced exploitation rate estimates that were biased low due to catchability increasing between the two survey periods; however, Change-in-Ratio population size estimation yielded exploitation rates averaging 93%, and 99% respectively, for Stikine Flats, and Duncan Canal open escape ring pots and 83% and 83% for Peril Strait, and Tenakee Inlet closed escape ring pots. In Port Camden, St. James Bay, and Berners Bay, low, variable, and even negative exploitation rates were estimated, probably as a result of inseason recruitment molts, which violates the assumption of a closed population. 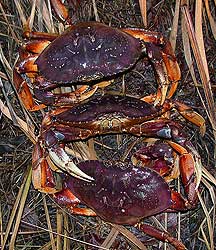 The following is extracted from the extended abstract describing the results of this project.

2 “Seven areas of Southeast Alaska ––Peril Strait, Tenakee Inlet, Port Camden, Duncan Canal, Stikine River Flats, Berners Bay, and St. James Bay––were surveyed twice yearly. Tagging was conducted during seven time periods; postseason––August or September of 2000, 2001, and 2002; and preseason––June of 2001, 2002, 2003, and 2004. However, not all areas were surveyed in each time period. All or a random subsample of male crabs captured were tagged in the posterior margin of the epimural suture immediately posterior to the fourth walking leg on the right hand side as viewed dorsally. To minimize tag loss, a Floy double T-bar anchor rag (FD-94) was used. In all, 7,996 male crabs were tagged. Carapace width of all tagged crabs was measured to the nearest millimeter immediately anterior to the tenth anterolateral spine using vernier calipers. Crab shell condition was visually assessed and categorized and shell hardness of a subsample of tagged crabs was measured using a durometer (Hicks and Johnson 1999). The release sizes ranged from 111 mm to 207 mm CW. As recovery was accomplished almost exclusively through the commercial fishery, tagged crabs recovered either exceeded or were just under the legal size of 165 mm CW––ranging from 157 to 210 mm CW. A total of 1,823 or 23% of tagged crabs were recovered. Carapace width and shell age of all recovered crabs was determined and tag numbers, and recovery dates were recorded. The sizes of over 90% of releases and recoveries were within a range of 140–190 mm CW. Tag-release/recapture data from all seven areas for the period 2000 through 2003 were used to estimate growth increment and molt probability for male Dungeness crabs. This included 744 recaptures. Growth increment was reanalyzed for the 1960s tagging data. Growth increments for the two time periods were statistically compared. The annual molt probability of a male Dungeness crab in Southeast Alaska declined from 100% at 149 mm CW to near 0% by 182 mm CW. . . . . . For the 2000–2003 data for all areas combined, the annual growth increment was constant within the size ranges tagged, with a mean value of 29.91 mm CW.” 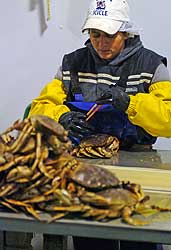 Dungeness crabs are banded to restrain claws prior to cooking dockside at a commercial processing plant.

An ADF&G biologist was stationed onboard the charter vessel to count and sample the catch. Daily, set locations, and set and pull times were recorded for all or a subsample of pots and the contents of the pot recorded. The Dungeness crabs were measured, shell condition, leg condition and reproductive status of the females was determined, if time permitted. Bycatch species were also counted and recorded for each pot. All crabs were returned to the water after sampling.

A total of 605 pots were set of which 425 pots were sampled for crab. A total of 32 sublegal, 57 legal, and 38 unmeasured males, and 33 female Dungeness crabs caught in the sampled pots. Only 1 of the 33 females captured was ovigerous. The soak times ranged from 15–48 hours. Most pots were set in 3 - 10 fathoms water depth. There were a couple of pots that were set in 10–20 fathoms. For comparison purposes, a cursory examination of fish ticket data from Registration Area D shows that for fish tickets on which pot lifts were recorded the catch rate ranged from 3.4 – 4.5 pounds/pot or 1.7 – 2.3 crabs/pot (assuming a 2 lb average) from 1995 – 1999 prior to the closure of the fishery.