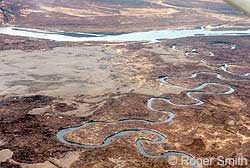 The Bristol Bay critical habitat areas are major migratory stopover areas for hundreds of thousands of ducks, geese, and shorebirds in the spring on their way to northern nesting grounds, and in the fall on their return to southern wintering grounds. The vast expanse of tidelands and wetlands in these five embayments provide ideal feeding and resting habitat for birds to recover and restore their energy reserves on their long twice-yearly flights.

In the fall, Ugashik Bay (Pilot Point Critical Habitat Area) and Cinder River are particularly important feeding and staging areas for the world's population of cackling Canada geese. Tundra swans concentrate at Cinder River in the spring and fall and Port Moller is especially important for emperor geese. Shorebirds use the areas in largest numbers in the fall. The most abundant species are rock sandpipers, dunlin, bartailed godwits, and western sandpipers. 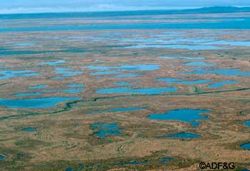 Harbor seals haulout and pup on spits and offshore islands. An occasional walrus can sometimes be spotted on the more remote beaches. Sea otters are abundant in Port Heiden and Port Moller. Brown bears scavenge the beaches for carrion. A portion of the Northern Alaska Peninsula caribou herd calves in the vicinity of Cinder River and seeks insect relief on the breezy coast. Smaller mammals, including river otters, mink, red fox, and wolverine can be spotted along the coast as well.