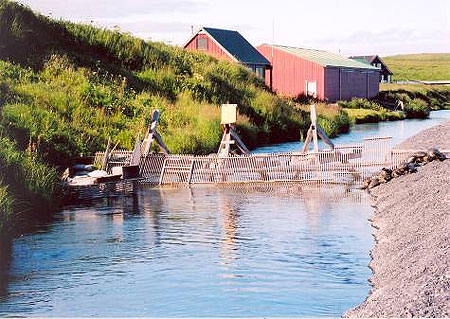 The Upper Station (Olga Creek) weir is approximately 11 m (35’) long and is located near the outlet of Olga Creek where it drains into upper Olga Bay, on the south end of Kodiak Island. The weir was first constructed in 1929 just above the lagoon, approximately 0.23 km (0.14 mi) upstream of its current location, and was operated there until 1969. From 1969 to 1992, the weir was operated near the outlet of lower South Olga Lake. The weir was moved to its current location in 1993. The weir is operated by two ADF&G Commercial Fisheries Division employees from late May to mid-September. The Upper Station system has two distinct runs of sockeye salmon; an early run prior to and including 15 July, and a late run which occurs post 15 July.