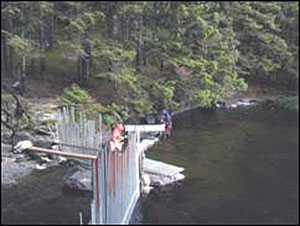 The Pauls Bay Weir is approximately 6m (20') long and is located at the outlet of Pauls Lake, approximately 1.3km (four-fifths of a mile) above Pauls Bay, on the north end of Afognak Island. A weir was first constructed on this system in 1983. From 1978 to 1983 sockeye salmon counts were made from a fish ladder at the outlet of Laura Lake, approximately 1.6km (one mile) upstream from the weir’s current location. Pauls Bay weir is typically operated by two KRAA funded ADF&G Commercial Fisheries employees from early June to mid September. 2014 will be the first year since 2004 that the weir will be operated.