You are here: ADF&G Home » Fishing » Sport » By Area » Southeast » Petersburg and Wrangell
Sign in
myADF&G 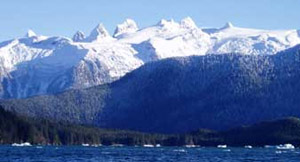 The Petersburg/Wrangell area is located midway between Juneau and Ketchikan and encompasses the islands of Kuiu, Kupreanof, Mitkof, Zarembo, Etolin and Wrangell. It also includes the portion of the mainland east to the border with British Columbia and from Cape Fanshaw south to Meyers Chuck on the Cleveland Peninsula. Frederick Sound and lower Chatham Strait form the northwestern boundary of the area, and Prince of Wales Island lies to the south and west, separated by Sumner Strait and Clarence Strait. Most of the area lies within the Tongass National Forest boundary and is managed by the U.S. Forest Service. Much of the remaining land is state and local government owned, while some is held in the private sector.

Forested and glaciated mountains, areas of open muskeg, numerous islands, tidal estuaries, and expansive alluvial river deltas make up the landscape in this diverse Central portion of Southeast Alaska. Evergreens dominate the fores - Sitka spruce, western hemlock, western red cedar and Alaska-cedar. Exposed coastal areas are rocky and rugged, and small islands dot the waterways. Inner, more protected areas and waterways may include expansive intertidal areas, productive tidal estuaries and salt chucks, and even ice-choked glacial fjords. Dozens of streams and lakes are scattered throughout the area, and the 330-mile-long Stikine River, flowing out of British Columbia, empties into Eastern Passage just six miles north of Wrangell. Although the waters surrounding this region belong to the Inside Passage, wind and water conditions still can be formidable and should be respected.