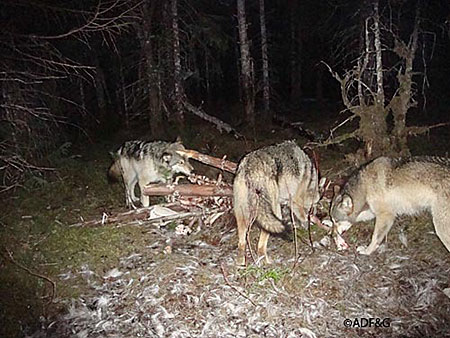 Wolves at a kill site in the Gustavus area were captured by a motion-triggered trail camera.

Roffler works in the Division of Wildlife Conservation for the Alaska Department of Fish and Game studying wolves in Southeast Alaska. A new pilot study, launched in 2018, has her examining the kill sites of radio collared Alexander Archipelago wolves in an effort to “quantify what wolves are killing, and how many (animals) they are killing during different seasons.” She said it’s the first study of its kind to be conducted in the southeast region of the state, and it’s one that was modeled after others done in Canada, Yellowstone National Park and on Mexican wolves in parts of the Southwestern United States.

In the field, Roffler must put assumptions aside and approach each kill site with the eye of an investigator.

“It is a crime scene. Literally. It’s a murder scene,” she said. “So, we approach the site and try to accumulate all the evidence we can find.”

First, the team looks for tracks, they observe vegetation and look for signs of hair in branches, or twigs that have been snapped, grass that has been trampled, or ground that has been torn up. “Often, there’s going to be a fight if a wolf is killing something.” 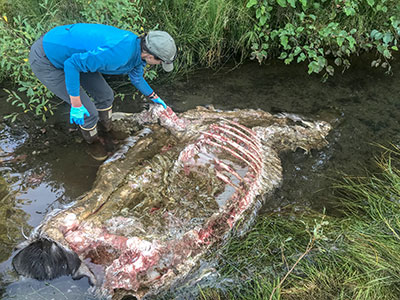 Wolf biologist Gretchen Roffler examines a moose kill site near Berners Bay in summer of 2018 as part of her pilot study aimed at identifying what wolves are killing and how many animals they are killing during different seasons.

Then, the team looks for remains — a carcass, a part of a carcass, entrails, organs, bones, hair, anything that hasn’t been consumed. Sometimes there’s plenty to find, other times, she said, there’s nothing left at all.

“At the carcass, we try to determine what killed it. We can’t assume it’s wolves; it could have died from other causes or other predators,” Roffler said. “So, we look specifically for some telltale signs of wolf predation.”

This can include, for example, wolf tracks and scat, canine bite marks of a specific size on the hind quarters of the animal, signs of bleeding under the skin, and parts of the kill spread around the site like a spoked wheel.

Collecting evidence at the site is straightforward. Biologists gather things such as bones to establish body condition, which is done by examining the color and consistency of the marrow. They take swabs of wolf saliva on tissues to identify individual wolves genetically. They collect hair and other tissues to obtain DNA for species and sex identification. Sometimes, Roffler said, all they find is some hair and blood.

“We send samples to the genetics lab to get identification of the species,” she said. “If we don’t know (what something is), we can eliminate the guess work. If we find a skull, we can pull a tooth and get the age. If we can determine the age class and sex of the prey, we can better estimate the biomass of prey used by wolves.”

And while many of the investigated sites are many days, or even weeks old, a couple times last summer biologists got lucky, so to speak, and the scene of the crime was quite fresh. 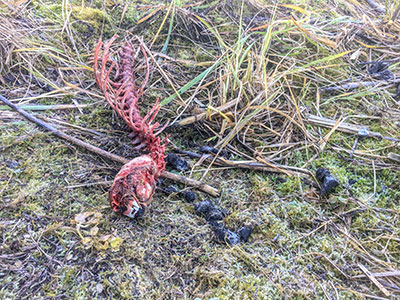 Sometimes, not much is left at the site of a wolf kill. In this case, only the skull and vertebrae are left of the prey. Also left behind were some wolf scats. Wolf biologist Gretchen Roffler said she attempts to collect as much evidence as she can at each of the sites as part of her pilot study to "quantify what wolves are killing, and how many (animals) they are killing during different seasons."

“We had one kill site with a moose yearling carcass,” Roffler said. “Susannah (Woodruff) and Maddie (Kombrink) investigated the site. They described a ravine, and they could see where the wolves had run this moose down. There was broken vegetation, drag marks and tracks.”

At that site, quite a bit of the prey was left, she said. The pair was able to identify the gut pile, hide, partial skull, ear, a scapula, one hind leg and some ribs with flesh.

The ultimate goal for the project is to figure out how much biomass wolves consume per time period.

“It’s predation rate we’re interested in,” Roffler said. “In Southeast Alaska, predation rate of wolves has been previously estimated indirectly. But this is a study designed to estimate kill rate directly and fill that information gap.”

But in an area as vast and varied as Southeast Alaska, wolf kill sites are hardly easy to find. To help locate them, Roffler deployed iridium global positioning system collars on wolves in two different systems — Berners Bay and the Gustavus area. In each system, the wolves’ primary prey is a little different; in Berners it’s moose and goats, whereas in Gustavus it’s moose and black bear. The GPS collars report on the position of the wolves every 30 minutes. Roffler looks for a pattern in the coordinates she calls a “cluster.”

“We define clusters based on an algorithm that has been tested on other wolf studies in North America,” she said. “And so we go to these clusters on the ground and investigate them.” Wolf biologist Gretchen Roffler walks toward a helicopter after examining a wolf kill site in Berners Bay in 2018, which was identified by a cluster of GPS points logged by a pair of collared wolves.

Basically, it’s a place where the wolves are loitering for an extended period of time.

Clusters aren’t always a kill site however, she said. “The majority are just places wolves have rested or used as a rendezvous site. To identify kill sites we have to really look for clues — sometimes it’s fairly obvious, but other times you have to look closely to find any sign.”

The site could also be a scavenging site, if the prey was killed by something else like hunters, for example, or a bear and then the wolves visited the remains of the carcass.

Roffler wants to expand the study area to include areas occupied by deer or expand into a system that contains deer and another ungulate, such as moose or goats. By including systems, or habitats, where wolves have more than one primary prey species, the hope is she can answer one of her main questions: Given the presence of multiple ungulate prey species, which one would wolves select, and is that consistent throughout the year or does it differ among seasons?

In January, Roffler was tallying her preliminary data.

“We had 113 clusters, and we investigated 89,” she said. “It was a lot of sites to visit, and a lot of people helped make the field season successful.”

Roffler’s next step, weather permitting, is to visit the latest clusters on the winter landscape. She’s hopeful she will find some sites with plenty of clues left behind to help her unravel the unanswered questions.