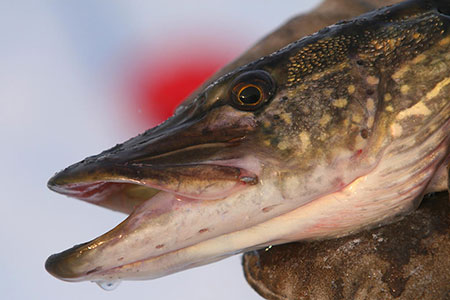 Several years ago while at a friend’s house, I noticed an open jar sitting on his kitchen counter. It contained what looked to me like pickling spice, red onion slices and white, flaky pieces of fish. The unmistakable aroma of vinegar emitted from the clear vessel. “Before you ask what it is, just try some,” he said, his notable mid-western accent preceding a half-smile. I grabbed a fork and dug out a small piece. I knew it was fish, but I’d never eaten fish pickled before.

The taste was sweet and a bit sour from the vinegar. The flesh was firm. The sweetness, he later told me, was from sugar he added to the recipe. We finished what was left in the jar as he explained to me in fine detail the process by which he caught, filleted and pickled a northern pike.

When I lived in Fairbanks I would often target northern pike using my fly rod. I learned different areas close to Fairbanks that offered decent pike opportunities. I also enjoyed ice fishing for pike in some of the same areas where I targeted them during the open water season. For as many as I caught, I recall only ever keeping one fish. It was a good sized pike, measuring around 32 inches. I wanted to learn the proper way to fillet a pike, to cook the meat, or even take a note from my friend and pickle some. I took my time filleting the fish. The meat was firm, white. I followed instruction detailed in a brochure I found on ADF&G’s website. It wasn’t hard. Upon completion I had a couple bags of pike fillets.

I was staying at a cabin that night in an area frequented by pike anglers. It was August and the evenings were getting cool. We had a fire going in the small cabin and I was reluctant to leave the pike fillets inside for fear they’d spoil. I set the bagged fillets just outside the front door and covered them with a small towel. I wanted them to cool overnight. I retired for the evening without a second thought.

We woke early the next morning and began making preparations to return home. We gathered what little supplies we had and stuffed everything into backpacks. I began to imagine the ways I was going to cook the pike. Fry it. Bake it. Season it lightly and pan sear, drizzle lemon juice over the cooked meat and enjoy with rice. At that point I was no longer interested in pickling any of it. 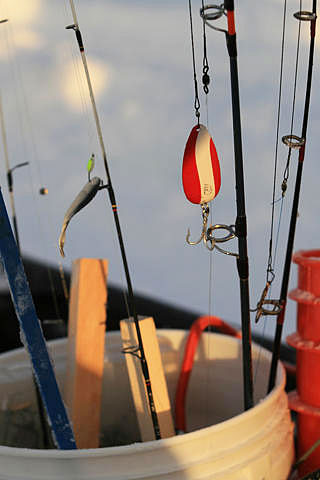 I opened the door and looked over to the spot where I left the bags the night before. Nothing. No bags, no pike fillets. I asked my wife if she packed them. No. I began to feel as if I dreamt the whole thing. The weedless silver spoon I used, the aggressive strike, the landing of such a fine fish – all imagined. I continued looking around the cabin. I searched for signs of plastic bag torn up by some small creature. Nothing. Whatever thief that came left no sign of its existence. I went back in and explained the occurrence to my wife, asked her if she was hiding them, if I imagined the whole day previous.

As I stepped again outside, bag over my shoulder ready to head home, I caught the sight of three black objects perched in a distant tree. Ravens. I stopped momentarily, watching them watch me. They spoke against the coming morning with a language that was either in gratitude, or in jest.

Information on the Alaska Department of Fish and Game’s website states, “Invasive species are plants or animals that do not naturally occur in an area and can negatively affect the environment, the economy, and/or recreational activities. In Southcentral Alaska, northern pike are doing just that. Pike were first illegally introduced into water bodies of the area by people, and they are now decimating salmon and trout populations. This causes ecological damage and also negatively affects the economy by reducing recreational fishing opportunities.”

Illegal introduction. What a shame.

In Southcentral waters there is no bag or possession limit on northern pike and in the freshwaters of West Cook Inlet and the Susitna River Drainage, and anglers are not allowed to release live pike back into the water. There are several waterways throughout Southcentral with the documented presence of northern pike. Information found here details those areas. 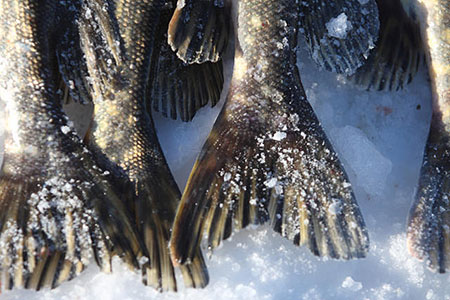 I have ice fished for pike in various lakes in Southcentral. Mostly road-accessible. The lake closest to me with northern pike is Lower Fire Lake in Eagle River. I fish this lake most often, with varying degrees of success. Some days I do really well jigging or using tip-ups. Some days I employ different strategies and come up short. Normally on slow days I see a drop in barometric pressure, which I attribute to poor fishing.

While I’m no expert pike angler, there are a few things I’ve learned on the ice which have led to increased success – especially when fishing in unfamiliar waters.

First and foremost, I do my research. I utilize the many resources on ADF&G’s website including the Alaska Lake Database. This is a fairly comprehensive database of lakes in Alaska that includes pertinent information for anglers. I also talk to people and review material like this webpage on ADF&G’s website.

What’s proven most effective for me is simply getting out and going fishing. I’ve learned not to wait for someone to hand deliver to me some manual detailing how to always be successful on the water. I like the challenge of figuring things out. Learning a new lake. The reward isn’t always the fish.

Secondly, I use electronics. I invested in a flasher a few years ago and it has proven to be one of the most effective tools in my ice fishing arsenal. I typically target pike in anywhere from four feet of water up to 12 feet. Using electronics helps me gauge water depth, locate underwater cover and notice changes in substrate. I’m also able to adjust my jigging techniques based on the fish’s behavior. I use aggressive jigging techniques until I mark a fish. More often than not if I continue the aggressive jigging the fish often turns away. However, if I slow my technique down considerably in their presence this usually leads to a bite. My preferred offering is a white, rubber bodied jig with a twist tail. I’ve also had success using white tube jigs or spoons with a small piece of herring attached. 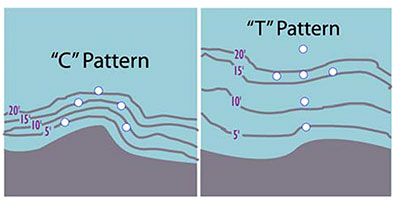 In some lakes in Southcentral, anglers targeting northern pike are allowed to use up to five lines. Five Line Lakes are listed in regulation under the Susitna River Drainage, Knik Arm and West Cook Inlet. Here is a link to the Southcentral Sport Fish regulations online: http://www.adfg.alaska.gov/index.cfm?adfg=fishregulations.sc_sportfish . Certain stipulations apply when using five lines to fish for pike, so familiarize yourself with regulations before heading out.

If I’m fishing a Five Line Lake or a lake where, by regulation, “sport fishing through the ice is permitted using two closely attended lines, provided only one hook or artificial lure is used on each line,” I begin by drilling holes in a C or T pattern traversing a weed-bed or some form of underwater cover. When using tip-ups, I bait each hook with a small piece of herring or hooligan. I vary the depths at which each line is set so that the water column is covered. When using two lines, sometime I’ll set one tip-up in addition to my jigging set-up, or I’ll jig with one rod and dead-stick with another. This method involves leaving one ice rod set in a rod holder where the offering is suspended and motionless, while jigging with another rod. Given the fact that pike have extremely sharp teeth, no matter what set-up I am using I make sure I attach a wire leader to the fishing line to reduce the possibility of a pike’s teeth fraying my line.

Ice fishing for northern pike in Southcentral is a great winter activity. I encourage anglers to get out this winter and target pike through the ice. Be sure to check sport fish regulations on any water you intend to fish for pike. If you have any questions please feel free to contact the Sport Fish Information Center in Anchorage at 907-267-2219.