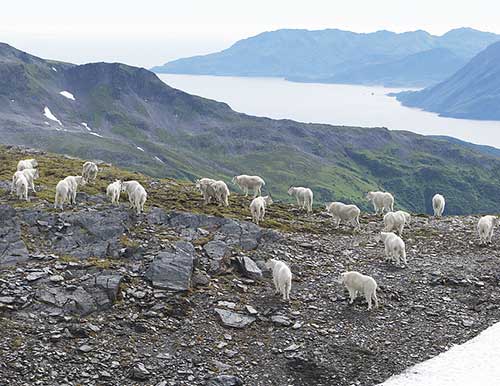 Kodiak Island mountain goats. In the summer of 2013, 15 mountain goats were equipped with GPS and VHF radio collars to help biologists learn more about these animals. Photo by McCrea Cobb.

Sometimes a population explosion is a good thing.

Since mountain goats were introduced to Kodiak Island 60 years ago, the population has grown from 18 animals to about 2,500. That’s good for goat hunters, but biologists and land managers want to know what it’s doing to the island. They’ve launched a research project to better understand the mountain goats' behavior and affect on their habitat.

Newcomers to the Island

Mountain goats are not native to Kodiak, the largest island in Alaska and (just slightly smaller than the Big Island of Hawaii) the second largest island in the United States. Much of the island is part of the Kodiak National Wildlife Refuge and is managed by the U.S. Fish and Wildlife Service (USFWS).

In 1948, the Alaska Game Commission, the USFWS, and sportsmen’s organizations launched efforts to introduce goats to Kodiak. Permits were available to anyone willing to try and capture a mountain goat, and $200 was offered for a nanny in good condition. Over the next few years, a number of attempts were made by the USFWS and private individuals to capture goats - using padded steel leghold traps, corral traps baited with salt, goat drives and lassos, nylon snares and salmon nets - and all were unsuccessful.

Finally in 1952, five goats from the Kenai Peninsula were captured and introduced to the island. Unfortunately, they were all billies. In November and December of that year, a nanny and a billy from the Eagle River area near Anchorage were caught and introduced to Kodiak, bringing the total to seven.

The bounty was upped to $400 for nannies and $100 for billies, and the following year, a group of trappers in the Seward area about 250 miles north of Kodiak developed a capture technique. They stalked a group of goats, charged at them yelling, and then roped the ones that would stand and fight. They hauled the roped goats to sea level on toboggans. One billy and nine nannies were caught by the goat ropers and released on Kodiak in 1953. Refuge records indicate two more goats were introduced in 1953, but one died shortly after arrival. All 18 goats were released in the Hidden Basin area at the head of Ugak Bay, about 30 miles southwest of the town of Kodiak.

A few severe winters followed and survival of the goats was questionable, but an aerial survey in 1964 counted 26 goats, and in 1972 that had grown to about 100. Hunting began in the late 1960s and the population continued to grow and spread. The 2004 estimate was 1,560. Today, goats have thoroughly dispersed and occupy all suitable habitat on the island.

“We have hard counts of 2,000 and we know we’re missing some individuals during aerial surveys, so we estimate the population at about 2,500,” said wildlife biologist Nate Svoboda. Svoboda serves as the ADF&G area biologist for Kodiak.

In late June, a team of biologists from ADF&G and USFWS captured 15 goats. A dart rifle, immobilizing drugs and a Hughes 500 helicopter with an excellent pilot made the capture process considerably more efficient (and a bit more expensive) than it was in the early 1950s. Eight billies and seven nannies were caught and processed in just three days. They were “double collared,” equipped with both VHF and GPS collars. ADF&G wildlife biologist Kevin White, who has participated in mountain goat research in Southeast Alaska since the early 2000s, helped put together the study plan and capture goats. Larry Van Daele, who served as the Kodiak area biologist for decades, and biologists John Crye and Jason Herreman also participated. 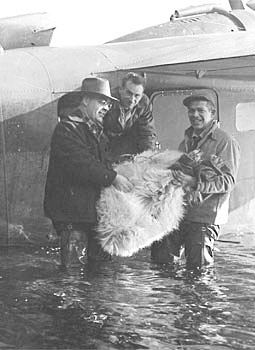 A mountain goat captured on the Kenai Peninsula is relocated to Kodiak Island in 1952 or 1953.

“We’re looking at trying to quantify diet and feeding site selection – what they eat, and how much of each of those plants they’re eating,” Cobb said. “We collect (fecal) pellets and bring them to a lab that can identify the plants fragments and give us an idea of the proportions of the different plants in the diet.”

The effort this summer marks the first time goats on Kodiak have been collared. These GPS collars record the animals’ location once an hour, enabling researchers to create a comprehensive map of each animal’s movements. Goats were captured on alpine ridges all across the island, at elevations between 1,200 and 4,200 feet. The capture locations are about eight or nine miles apart and the southernmost site is about 80 miles southeast of the northernmost site.

“We’re interested in their distribution patterns, habitat use, how they are moving across the landscape and how they move seasonally,” Svoboda said. “We know they spend considerable time above 1,000 feet, and we’d like to know what resources they are using in that area. We also see goats on the shoreline at some points.”

It’s usually necessary to retrieve a GPS collar to recover the data, but these devices are a little more sophisticated.

“These collars are downloadable,” Svoboda said. “You can fly out in an airplane, locate the animal and download the data to a laptop. It’s a top of the line system for this kind of research.”

Data from two goats has already been downloaded, one from the air. Svoboda said weather has limited flying opportunities and biologists are hesitant to fly during hunting season as they don’t want to disrupt hunting activities. Data from the second animal was downloaded directly – the collared goat was shot by a hunter who said he didn’t notice the collars, and the collars were turned in.

Battery life should enable the GPS to function until the summer of 2015, at least in theory. The collars are programmed to drop off the animals on July 1, 2015, and biologists will retrieve the units for refurbishing. The second collar the goats are wearing contains a VHF radio unit. Battery life for the VHF collars could potentially last five years, to 2018. No data is recorded or stored, but biologists can fly over the ridges with a radio receiver and locate the animals.

During the captures in late June, biologists collected samples of tissue, hair, fecal pellets and blood. Blood samples will allow biologists to test for diseases, trace minerals and stable isotopes, which provide insights into the animals’ diet. Any tissue with DNA allows researchers to look at genetics and inter-relatedness between populations. Pellet and hair samples provide insights into health and physiology (for example, hormones and the endocrine system). Large red ear tags were attached and will enable easier identification during future aerial surveys. Animals were also weighed. Most of the goats weighed between 124 and 170 pounds, but three billies weighed in at about 245 pounds. 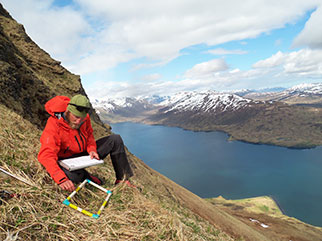 USFWS biologists with the Kodiak National Wildlife Refuge are studying the plant communities and ecosystem to learn more about the effect goats are having on their habitat. McCrea Cobb photo.

Processing and tagging took about 45 minutes, and the goat’s body temperature was monitored throughout and care was taken that animals did not overheat. After processing, a reversal drug was administered and most animals were up and moving within five minutes.

Goat hunting is popular on Kodiak, and hunting is also an important management tool for biologists. About 160 goats a year have been harvested on Kodiak in recent years, more than any other management area in Alaska. That said, it’s not easy hunting.

While harvest is relatively high, the population has continued to grow. “This year is the first year we opened a two-goat harvest limit, hunters are allowed two goats in certain areas,” Svoboda said.

Wildlife biologist McCrea Cobb with the Kodiak National Wildlife Refuge said goat numbers have increased the most in the hunt areas that are refuge lands, and some of these areas have the highest densities of goats on the island. But that’s not true everywhere. “Some areas have seen goat numbers decrease a bit, and then stabilize at a lower level,” he said. “The goal is to develop a harvest management plan that allows for harvest and maintains the population at a level where the goats won’t negatively impact the fragile alpine environment.”

It’s an important consideration, for the alpine and the goats. Kevin White has been working on the same issue with moose in the Gustavus area of Southeast Alaska. A population of animals, either natural colonists like the Southeast moose or the introduced goats on Kodiak, will thrive in a productive new environment and eventually reach the carrying capacity of the range. At that point they can damage the range and substantially reduce the carrying capacity.

“The main goal is to figure out a population size that can be sustained for the long term,” Cobb said. “To keep the population from increasing to a point where they over-utilize their resources and then drop to a lower level.”

Collaboration is making that easier. “This is a great example of how the Fish and Wildlife Service and Fish and Game can work together toward a common management goal,” Cobb said.

Riley Woodford is the editor of Alaska Fish and Wildlife News and the producer of the Sounds Wild radio program.

Game Transplants in Alaska offers a wealth of history and information on the subject, including the introduction of Canada geese, hares, foxes, muskrats, beavers, mink, raccoons, and red squirrels to Kodiak Island.

The Fish and Game website offers more on mountain goats and goat research in Alaska...

…as does this report from USFWS