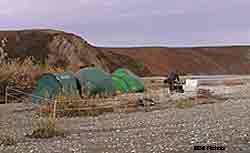 Wildlife biologist Tim Peltier didn’t see the brown bear sneaking up on his campsite. He just heard a loud “pop,” and when he turned, the bear was running away.

Peltier was working in Hallo Bay in Katmai National Park. He and his campmates were cooking dinner when the bear approached them from behind. Fortunately, they had surrounded their camp with an electric fence, powered by a 12-volt car battery and a solar charger.

“She contacted the fence,” he said. “And it worked.”

Livestock-style electric fences have long been used to keep bears away from field camps, food caches and bee hives. In Dillingham, Alaska, electric fences are used around smoke houses, set net sites and the town dump.

“Bears don’t like electricity,” said Bill Carland, who sells, rents and installs electric fences in Dillingham. “Once they are hit with it, they stay away.”

Today, electric fences are surprisingly lightweight and portable, and units powered by two D-cell batteries are available for backpackers. Models weighing less than four pounds, running about $300, will enclose a 30 ft. x 30 ft. area and deliver a charge of about 6,000 volts.

These fences can be an asset for campers in bear country, but researchers who study them say there are drawbacks and tricks to using them effectively. Some outfitters consider them impractical for guided trips, and they are not a substitute for keeping a clean camp.

Electric fences were developed in the late 1930s. The key element is the charger, which energizes the fence wires. A capacitor steps up the voltage, and the current pulses through the wires in short bursts. Although the voltage is high, the amperage is very low. The shock is painful but not dangerous, and essentially trains animals to stay back.

Fence chargers should deliver between 5,000 and 7,000 volts, said wildlife biologist Dick Shideler with the Alaska Department of Fish and Game in Fairbanks. It must be set up properly to work. “They’re easy to set up, but if you don’t clear the vegetation from the bottom wire, it really drains the charge,” Shideler said.

The effectiveness also depends on the surface the fence is set up on. A dry substrate substantially reduces the shock delivered by the fence. Sand, gravel and cobble are poor conductors. Shideler said the fences work best on damp ground or vegetation, or if the fence is designed so that the bear touches the ground wire and a hot wire at the same time.

Mel Cheek of Anchorage used a fence energized by two D-cell batteries on a caribou hunting trip in late September. After flying out of Bethel to a remote area and setting up camp, Cheek tested the fence with the back of his hand. It worked quite well, he said. The first night, he and his hunting partner heard a bear snuffling around outside the tent, and it left without incident. The next night it snowed and the fence completely died. Fortunately, they had no more visits.

Sam, a captive bear at a research facility in Montana, helps biologist test the effectiveness of battery-powered electric fences. Photo by John Gookin.

“It did suffer from the cold,” Cheek said. “The unit was pretty fragile and it was tough to keep the fence standing. I like the whole idea of using these, but they are just one more thing to pack into a crowded plane.”

It wasn’t the cold that killed the fence, it was probably the snow, according to researcher John Gookin. Gookin oversees research projects for NOLS, the National Outdoors Leadership School. He’s been studying electric fences and bears for the Interagency Grizzly Bear Committee, a partnership of federal land management agencies.

Gookin tested battery-powered fences in a walk-in freezer to see how they hold up. He found that units powered by two D-cell batteries, rated to run for two weeks at 60 degrees, can run for eight days at below-freezing temperatures.

“They’re still effective at 20 below, as long as snow doesn’t short out the hot wire,” he said. “Even a small amount of snow, especially damp snow, will short out a fence.”

Gookin said the novelty of a fence around a campsite contributes to the deterrence to bears, but the shock leaves a lasting impression. Even a mild shock is effective. Gookin said he’s had fences that delivered only 3,000 volts work on test bears. But if it’s raining, or the wind blows vegetation against the wire, the charge is compromised.

Gookin tested fences with captive grizzly bears at a facility in West Yellowstone, Montana. He set up a 10-foot by 10-foot area within the bears’ enclosure and placed a baited cooler in the center.

“When a bear first gets a shock, he cries like a baby and runs away,” Gookin said. Fence-savvy bears were reluctant to even approach the test fences. Gookin had to bait the area around the fence just to draw the bears’ interest. They were attracted to the food inside, but they were cautious.

“They put their noses within an inch of the fence to see if it’s charged,” he said. They don’t smell the electricity, he said. He monitored their breathing and found they don’t audibly sniff the wire the way they do when they are actively testing the air for scents.

“They’re feeling for a tingle in the air,” he said. “I’ve seen goats do that too. They put their nose really close and don’t get zapped, but they can tell it’s live.” 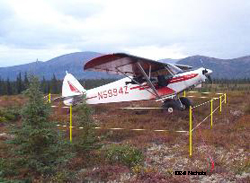 Curious, hungry bears have damaged planes in an attempt to find food. Photo by Bill Nichols.

Bears reached under the wire and tried to dig under the fence, but they would not risk shock. Gookin said that when a fence was first set up and energized, the bears would check it out, and then just assume it was always on. Even if the charger was removed, the bears continued to treat the fence as if it was hot.

He found that the most effective fences have an alternating hot wire and ground wire, which means a bear contacts both and gets a shock regardless of the substrate the fence is sitting on. Fences that use a netting-style wire mesh also provide a visual, physical barrier. A set of blinking LED lights attached to the mesh, running off a separate AA battery pack, further enhanced the barrier.

That’s not everyone’s idea of a back-country experience, and for a dozen campers on a week-long guided river trip a big fence, or set of fences, may not be practical. Wilderness guide Butch Carber said clean camping and practicing good “bear safety” has proven to be effective. Carber is the director of operations for Alaska Discovery, a Juneau-based company that specializes in wilderness kayak and rafting trips throughout Alaska.

“We think things are going well with the system we have now,” Carber said. “We keep a clean camp; we’re on top of the guests, everything is put away and secured, and we haven’t had problems. Everything is sanitized. Even an empty beer can is sanitized in a bleach solution before it crushed and put away. It’s camp maintenance.”

Tom Smith, a research ecologist with the U.S.G.S., has used bear fences extensively and written about their effectiveness. He recommends electric fences for certain situations – camps where bear numbers are high, where bears have created problems, and hunting camps where meat is stored – but would not suggest they be used by everyone.

“The vast majority of campers in Alaska have no serious bear problems nor should they have to suddenly be worrying about carrying and using a fence,” he writes. “I wouldn't think to use a fence in a place like Denali National Park... the bear numbers are too few and generally bear-human incidents rare. On the other hand, if I was going to camp along coastal Katmai I wouldn't be without one.”


For more on electric fences for bears, and staying safe in bear country, see: