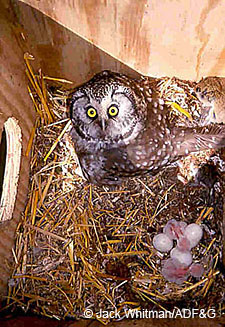 A boreal owl in a nest box with newly-hatched chicks

Bowhead whales and boreal owls are among the wide range of research projects proposed for the upcoming year through the Alaska Department of Fish and Game’s Wildlife Diversity program.

Biologist Mary Rabe, the program coordinator with Fish and Game's Division of Wildlife Conservation, put out the call for research ideas in October and received proposals for 83 projects.

The diet of bowhead whales in the Bering Sea, a survey of owl species in Southeast Alaska, a Southeast bat monitoring project and a study of the distribution of collared pikas and Alaska marmots are among the projects proposed. (Alaska marmots are large, Arctic-dwelling cousins of the familiar hoary marmot, and pikas are small, marmot-like mammals closely related to rabbits.) Fish and Game biologists also will initiate surveys of seabirds in northern Bristol Bay and of small mammals on the Kenai Peninsula.

Initial proposals were limited to a 500-word overview of the project, a timeline and rough budget of expenses. After the first review, between 15 and 30 of these ideas will make the cut to the second round. Fish and Game biologists will evaluate the proposed projects, working with biologists from outside the state agency.

“We try to bring in outside biologists to broaden our perspectives about what work is needed and important,” Rabe said. “They usually have research backgrounds and can also help evaluate the technical merits.”

In addition, about a dozen projects proposed last year will be reconsidered, and some funded last year are slated to continue. Last year, the program kicked off with 135 ideas for research projects, some spanning a three-year study period.

“We had a lot of good ideas proposed last year and we couldn’t fund them all, although we did end up funding 28 projects,” Rabe said.

Several ongoing projects include a study of the distribution and seasonal habitat use of American dippers, by biologist Mary Willson of Juneau, and a study of boreal owls in the Fairbanks area. The boreal owl project involves “citizen scientists,” volunteers helping researchers to gather critical data about nesting. An important aspect of the owl project is evaluating the effectiveness of widely used owl research procedures in the field – whether the listening and hooting surveys accurately reflect the presence of owls.

Biologist Jack Whitman of Fairbanks said he hopes to expand the citizen scientist aspect of his work in the coming field season. Public interest is strong, he said, and after volunteers receive a few hours of training he could send them out into the field.

“There are three owls I’m interested in, great horned, great gray and boreal owls,” he said. “If I teach the volunteers what those owls are and how to collect the data, outfit them with maps and GPS, I can turn them loose.”

Another owl project, targeting these nocturnal raptors in Southeast forests, is a joint effort between the U.S. Fish and Wildlife Service and the Alaska Department of Fish and Game. According to USFWS biologist Michelle Kissling of Juneau, little is known about the natural history, distribution and abundance of forest owls in Southeast Alaska. Kissling also hopes the public can be involved to contribute observations.

The money for nongame research comes from the federal government’s State Wildlife Grant program. Funding requests for the individual one- to three-year projects range from $30,000 to $233,000. A key element of the funding – and the intent of the program – is to involve partnerships. A 25 percent match is needed.

“They are required to bring at least one non-federal dollar to the program for every three dollars they request from us.” Rabe said. “Twenty five percent of the total project must be matched funding. We have been fortunate that many projects generate additional match, up to 50 percent in some cases, and bring in project dollars from other federal sources.”

“All of these people have other partners. It’s one thing we ask for, in fact, the more partners the better,” Rabe said. “Like the ABO Arctic warbler project – they’ve only asked for $30,000, and it’s a three year project – that’s only $10,000 a year, and they have a whole boatload of other partners. That makes a project more appealing for us. We look at what they need, the project’s merit and its partnering and matching capability.”