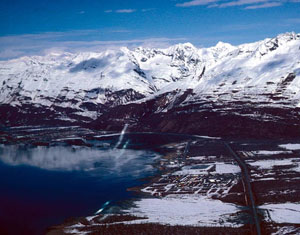 Surrounded by heavily glaciated mountains, Valdez hugs the shores of North America’s northernmost ice-free port, an 11-mile bay known as Port Valdez. Valdez has been front and center of many of the state’s most significant events: the Gold Rush, which lured the town’s first settlers; the 1964 Good Friday earthquake; the development of the Trans-Alaska Pipeline in the 1970s; and the 1989 oil spill by the Exxon Valdez oil tanker (named after its home port).

Established hastily in the late 1800s in the drainage of the Valdez Glacier (east of present-day Valdez), Old Valdez was situated for prospectors passing through. The unstable foundation of fine silt, sand, and gravel, however, would later doom the town to destruction in the 1964 Good Friday earthquake. Today’s city is located on higher, more stable ground.

Ask locals about the best places to view wildlife, and they’re likely to send you back out on the water. For a closer look at sights glimpsed from the ferry, try a wildlife viewing cruise that will bring you in close to the glaciers and provide good looks at marine mammals. Local companies also offer guided kayak trips or kayak rentals. Half-day or longer tours to the Columbia Glacier area offer close-up views of Heather Bay, icebergs, and the large variety of wildlife, from whales, seals, and sea lions to seabirds, including red-faced cormorants, surf scoters, pigeon guillemots, and horned and tufted puffins.

To learn more about wildlife, plants and geologic formations in the Chugach National Forest and Prince William Sound, stop by the USFS Crooked Creek Information Center on the Richardson Highway coming into Valdez, write to the center at P.O. Box 280 Valdez, AK 99686, or call (907) 835-4680.

Near the mouth of Port Valdez, Shoup Bay State Marine Park houses a black-legged kittiwake rookery as well as a tidewater glacier. Hike an overgrown foot trail or travel by boat to see oystercatchers, bald eagles, seals, sea otters, harbor and Dall’s porpoises, sea lions, and possibly peregrine falcons all in one trip. With a population of 20,000 breeding birds, the “kittiwake rock” in Shoup Bay is a noisy spectacle. In June and July, quiet paddlers may observe adults and chicks.

Close to town, the Duck Flats, across from the US Forest Service Crooked Creek Site information center and salmon viewing area is popular for birding. Harlequin ducks, Arctic terns, red-necked grebes, and great blue herons are possible sightings. The Forest Service station is a good place to stop for recent information on sightings or suggestions for local hikes.

A drive along Dayville Road toward the Pipeline Terminal in late evenings offers possibilities for bear viewing, sea lion viewing, and more—particularly when salmon are returning to the Solomon Gulch Fish Hatchery, the largest salmon hatchery in Prince William Sound. During pink salmon runs from late June to early August, park at Allison Point for endlessly entertaining views of sea otters, sea lions, black bears, kittiwakes, glaucous-winged gulls, and other seabirds all vying for the catch of the day. Watch for black-capped Bonaparte’s gulls, which can be elusive when nesting, but linger near salmon hatcheries to eat their fill of salmon eggs and fry. Sea lions dive after the fish with precision, as the salmon dart just beneath the surface. You may spot sea otters floating on their backs munching on fish nearly as large as they are, with gulls trailing after. Or you might be lucky enough to see a black bear training her cubs to snap the slippery fish from the water.

For a break from boats and marine life, pack a lunch and drive to Worthington Glacier State Park, through Thompson Pass. The scenery alone is dramatic enough to merit a drive. Large waterfalls such as Bridal Veil and Horseshoe Falls will command your attention.

The pass is a major breeding area for ground-nesting whitecrowned sparrows, which begin to arrive in early May and leave by September. During their migration, the birds fly as much as 300 miles per night, surviving on a fraction of their normal amount of sleep. Other common summer songbirds in the region include black-capped chickadees, goldencrowned sparrows, pine siskins, gray-crowned rosy-finches, and fox sparrows. You can also see ravens, Northwestern crows, magpies, and northern shovelers. Scan trees and skies for bald eagles and other raptors along the route, particularly between miles 4 and 10.

Worthington Glacier, beside the Richardson Highway, is one of Alaska’s most accessible glaciers, and has well-developed education information nearby as well as established trails for visitors.

Little is currently known about glaciers as habitat. Biologists studying ice worms are learning promising information about life in extreme conditions. Ice worms, which live in glaciers, are less than one inch long and die at temperatures not far above freezing. In warm weather, the black worms come to the surface only around sunset, when it is cool, to feed on algae, bacteria, and pollen. Other glacial residents may include snow fleas and spiders.