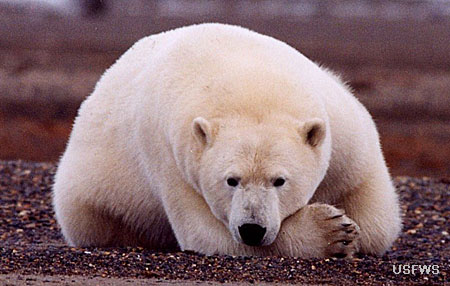 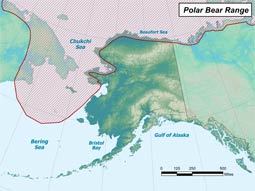 Polar bears have longer necks, narrower heads and smaller ears compared to other bears. Their white or yellowish coat is made of water repellant hair on top of a dense undercoat. They have large feet to help them swim and walk on thin ice. The bottoms of their feet are nearly covered in fur.

Females are sexually mature when they are 3–6 years old. Males reach sexual maturity at 4-5 years of age, but are generally not successful breeders until after 6 years of age. The breeding season for polar bears is March through May. A male will find a female by following her scent and tracks across the sea ice. After mating, the development of the fertilized egg (blastocyst) is delayed and does not implant in the female’s uterus until about late September. Once the embryo begins to grow, the gestation period is only about 2-3 months. In October and November, a pregnant female will find a denning area either on land or on the sea ice. She creates her den by excavating a hole where snow has accumulated, usually along a river bank, coastal bluff, or out on the sea ice. As snow drifts form, she will increase the size of her den. The cubs (usually twins) are typically born in December or January, and weigh 1-2 lbs and must remain in the protection of the den until they grow bigger.

By late March or early April when the cubs weigh ~20-25 lbs, they leave the den. For the first few days, the family will remain near the den, giving the cubs time to acclimate to the temperatures outside. After this time, the family group will travel to areas in the drifting sea ice in search of food. The cubs will remain with their mother for about 2 1/2 years and then the female will mate again.

Ringed seals are the main prey of polar bears. Bears capture seals by waiting at their breathing holes. They may also hunt seals that are resting on the ice or they break into seal dens, called lairs, made in the snow and capture females or pups. Polar bears also eat bearded seals, walrus, and beluga whales. Polar bears will feed on whale, walrus, and seal carcasses they find. When other food is not available, they will eat small mammals, bird eggs, and vegetation.

Polar bears’ seasonal movements are driven by regional ice dynamics and can be quite extensive. Most polar bears remain with the pack ice as it recedes north during the summer melting season; however, along Alaska’s Beaufort Sea coast, some polar bears also come on land to rest until shore-fast ice begins to develop along the coast in late fall and the pack ice advances south, once again providing them with a suitable platform for hunting seals.

In general, except for females with cubs, polar bears are solitary animals; however, marine mammal carcasses can attract large numbers of polar bears.

Polar bears occur throughout the northern polar region. In the winter, polar bears in Alaska are found as far south as St. Lawrence Island and occasionally move down to St. Matthew Island and the Kuskokwim Delta. In the summer, bears are most abundant around the edge of the pack ice in the Chukchi Sea and Arctic Ocean. Denning areas include Wrangel Island and other Russian Islands, islands in the Canadian Arctic, Greenland, and Spitsbergen, and the northern Alaska coast.

The status of the southern Beaufort Sea sub-population of polar bears is declining; the status of the Bering/Chukchi seas sub-population is unknown. Polar bears are listed as threatened under the Endangered Species Act (ESA) because the sea ice on which they depend for hunting, feeding, reproduction, and seasonal movements is declining. To learn more, visit the ADF&G Special Status page for polar bear.

Polar bears in Alaska were declining by the early 1970s. This decline was attributed to overharvest in the 1950s and 1960s from sport hunting which was legal and popular then. There was a moderate recovery during the late 1970s after the passage of the Marine Mammal Protection Act (MMPA) in 1972 when trophy hunting was banned and only subsistence hunting by Alaska Natives was allowed. In 2015, the Southern Beaufort Sea population is estimated to be ~900 bears and the size of the Bering/Chukchi seas population is unknown.

Current and predicted future declines in sea ice led the U.S. Fish and Wildlife Service to list polar bears as threatened under the ESA throughout their range. Thinner ice and longer ice-free periods in summer may reduce the length of time polar bears have to hunt, and result in population declines.

Oil exploration and drilling activities may pose some concerns for polar bears; bears can be displaced from high quality denning areas into less suitable locations. Contact with oil during an oil spill could reduce the insulation capacity of their coat and be toxic to bears. It could also negatively impact their food.

Polar bears are hunted by Alaska Natives as an important part of their culture. Polar bear meat is consumed, and their fur is used for clothing and blankets. Parts of the bear are also used for handicrafts.

Polar bears are protected under the Marine Mammal Protection Act (MMPA), the Endangered Species Act (ESA), and are managed by the U.S. Fish and Wildlife Service (USFWS) in cooperation with the Alaska Nanuuq Commission and the North Slope Borough. Since polar bears in the Bering and Chukchi seas region travel between Alaska and Russia, a bilateral agreement with Russia for bear research, management, and conservation exists. Similarly, Alaska Natives have also signed an agreement with the indigenous people of Canada regarding the hunting and management of the shared Southern Beaufort Sea sub-population of polar bears.

The U.S. Fish and Wildlife Service (USFWS) and U.S. Geological Survey (USGS) conduct polar bear research in Alaska. A long term mark-recapture study in the Southern Beaufort Sea is underway to determine population size, productivity, and how polar bears are responding to their changing environment. USGS and USFWS have also been monitoring the fall distribution of polar bears annually along Alaska’s Beaufort Sea coast using aerial surveys. USFWS and USGS also study polar bears in the Chukchi Sea to try to determine the status and trends of bears in that region.

ADF&G and the USFWS–Marine Mammals Management Office are collaborating on a project to evaluate the feasibility of 3 methods to detect polar bear dens in the Beaufort Sea. For more information see Cooperative Maternal Polar Bear Den Detection Project.

A diverse team of experts, the Polar Bear Recovery Team, has been convened to develop a conservation plan for polar bears. There will be opportunity for the public to comment on the draft plan; an announcement will be made when it becomes available.