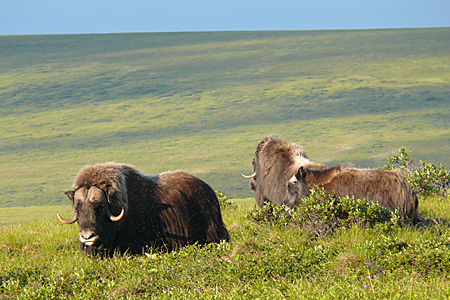 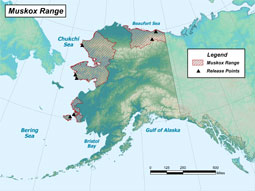 Muskox are native to Alaska, but were extirpated by the 1920s. In 1930, 34 muskox captured in East Greenland were transplanted to Alaska, and all muskox in Alaska today are descended from these animals.

The muskox (Ovibos moschatus) is a stocky, long-haired animal with a slight shoulder hump and a very short tail. Inupiaq-speaking Eskimos call itomingmak, meaning “the animal with skin like a beard,” a reference to the long guard hair that hangs nearly to the ground. Both male and female muskoxen have horns, but the horns of bulls are larger and heavier than those of cows. The horns of bulls develop large bases which nearly span the entire forehead. The coat consists of a long, coarse, outer layer, and a short, fine underhair. Coloration of the Greenland muskox, the race found in Alaska, is generally dark brown with creamy-colored hair on the “saddle,” forehead, and legs. Muskoxen have cloven hooves, all four of which are the same size.

Mature bulls are about 5 feet high at the shoulder and weigh 600-800 pounds. Cows are smaller, averaging approximately 4 feet in height and weighing 400-500 pounds.

At the close of the last ice age, muskoxen were found across northern Europe, Asia, Greenland and North America, including Alaska. By the mid-1800s, muskox had disappeared from Europe and Asia. By the 1920s, muskox had also disappeared from Alaska, with the only remaining animals being found in east Greenland and Arctic Canada. International concern over impending extinction of this animal led to an effort to restore a population in Alaska.

In 1930, 34 muskox were captured in East Greenland and brought to Fairbanks. This group was then transferred to Nunivak Island, a large island in the Bering Sea. The muskoxen thrived there and, by 1968, the herd had grown to 750 animals. Muskox from the Nunivak herd were later translocated to establish new herds on the Seward Peninsula, on Cape Thompson and Nelson Islands, in the Arctic National Wildlife Refuge, and on Wrangel Island and the Taimyr Peninsula in Russia. By 2000, almost 4,000 muskoxen existed in Alaska. In recent years, the herds in the Arctic National Wildlife Refuge and adjoining areas have declined.

For the muskox, the breeding season begins during late summer; mating takes place between August and October. Single calves weighing 22-31 pounds are born between April and June to cows older than two years. Growth is rapid and the animals weigh 150-235 pounds as yearlings.

Winter herds may include up to 75 animals. Smaller harem groups which form during the mating season contain anywhere from 5 to 15 females and sub-adults, with one dominant bull who prevents other adult bulls from entering the group. Bulls that are excluded from these breeding herds wander widely in search of a harem but generally rejoin mixed sex herds in the winter.

During the rut, bulls battle in spectacular and violent contests. After a period of aggressive displays, the bulls charge at top speed from distances of 50 yards or more and collide squarely on the horn bosses. After a clash, the bulls back away from each other swinging their heads from side to side and repeat the sequence until one bull turns and runs away. Battles have included upwards of 20 clashes. Bull muskoxen have heavily armored skulls to protect them from the shock of impact. Four inches of horn and three inches of bone lie directly over the brain in the area of contact.

Muskoxen eat a wide variety of plants, including grasses, sedges, forbs, and woody plants. These creatures are poorly adapted for digging through heavy snow for food, so winter habitat is generally restricted to areas with shallow snow accumulations or areas blown free of snow.

Muskox in Alaska can be found in northcentral, northeastern, and northwestern Alaska, on Nunivak Island, Nelson Island, the Seward Peninsula, the Yukon-Kuskokwim Delta, and in domestic herds across the state. Originally transplanted from populations in East Greenland, these creatures are well-suited and adapted to the harsh arctic climate of the areas in which they are found today.

There are about 4,000 muskox in Alaska in four general areas. Population estimates and trends are given by area.

Nunivak Island: Muskox were introduced to Nunivak Island in 1935-36 and the herd grew slowly until the late 1950s, then grew more rapidly. The first hunting season was in 1975, and the herd has since fluctuated between 400 and 750 animals. The management objective is to maintain a minimum population of 500 to 550 animals. About 84 muskox are harvested each year (five year average, 2001-2006).

Seward Peninsula and Nulato Hills (GMU 22 and Southwest 23): In 1970, 36 muskox were reintroduced to the southern portion of the Seward Peninsula from the population on Nunivak Island. In 1981, an additional 35 muskox were introduced. Muskox have extended their range to suitable habitat throughout the Seward Peninsula and as far east as Ruby on the Yukon River, and northeast into GMU 23 (see the next section). A 2007 census count in Unit 22 indicated 2,688 muskox, an increase since 2005, when 2,387 were counted. The population has been increasing since 2000. The total harvest, including subsistence, registration and drawing hunts, for 2007-08 season was 123 muskox.

Western Brooks Range and Kotzebue Sound (GMU 23): Two muskox populations inhabit this are products of translocations from the Nunivak herd. Animals in the Southwestern portion of GMU 23, between the Goodhope and Buckland rivers, are the product of the introductions mentioned in the preceding section, in 1970 and 1981. In addition, 36 muskox were moved to Cape Thompson from the Nunivak herd in 1970, and 34 more were released there in 1977. From 1970 until 1998 the Cape Thompson population grew about eight percent a year, and since 1998, the population has probably been stable at about 350 animals.

Central and Eastern Arctic Slope (GMU 26): In 1969 and 1970, 51 muskox from Nunivak Island were released on Barter Island (near the village of Kaktovik, about 75 miles from the Canadian Border) and 13 were released at Kavik River on the eastern North Slope (about 100 miles west of Barter Island). Over time, muskox moved east into Canada and west to the Colville River in the eastern portion of GMU 26A. The population increased steadily and during the mid-1990s was estimated at 500 to 600 animals, with another 100 estimated in Canada. Beginning in 1999, calf production, yearling recruitment and number of adults declined substantially in the northeastern corner of the state (GMU 26C), and in 2003 only 29 animals were observed. The population further west (GMU 26B) seemed to be stable or slightly increasing between 1999 and 2003. The population in 2005 was estimated at about 300 muskox in Unit 26B and eastern Unit 26A. It appears that mortality is increasing, this could be due to increased predation by brown bears, drowning, and starvation due to weather, stranding on sea ice, and poor habitat. Emigration may also be a factor. It is likely that the combined population of GMU 26B and 26C is fewer than 250 animals.

Muskoxen are valued for their meat, and about 260 animals a year are harvested by hunters. Muskoxen are also valued for wildlife viewing, for the artwork made from their horns, and for their soft underwool called qiviut, considered the world’s warmest wool for its weight. A cooperative of Native Alaska knitters produces exquisite garments from qiviut obtained by Alaskans on the Seward Peninsula and in Western Alaska, primarily Nunivak Island and Nelson Island. There are two domestic herds in Alaska; The Musk Ox Farm in Palmer, and the Large Animals Research Station (LARS) in Fairbanks.

Muskox management on the Seward Peninsula is guided by recommendations from the Seward Peninsula Muskox Cooperators Group, which includes representatives of the region’s villages, staff from state and federal natural resource managers. Management goals include providing for harvest and viewing opportunities, and responding to concerns from the public.

Four part series of articles on Muskox in Alaska

Links to sites about muskox 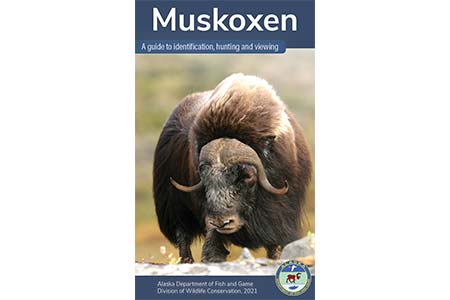