Moose are the most sought after big game animal in Alaska. Hunters report harvesting over 7,000 of Alaska's estimated 175,000 moose each year. Going out to “get a moose” is a fall ritual for tens of thousands of Alaskans. For beginning moose hunters, the most important thing to keep in mind is that moose are huge. (See life history page).

When choosing an area to hunt and a means of transportation, remember that you will have about 400 to 700 lbs of meat and up to 65 lbs of antlers to transport from the kill site to home. That's why many seasoned Alaskan moose hunters say “never kill a moose more than a mile from a vehicle of some sort.” The reason is that you will have 7 to 9 heavy backpacks of meat to carry and will have to walk several round trips between the moose and your vehicle—half of that with well over 50 lbs on your back.

Moose may be found throughout most of Alaska except on the Aleutian Islands, but they are most commonly found in Southcentral and Interior Alaska. Moose abundance, or density, can range from as low as one moose per 30 square miles to as high as 5 or more moose per one square mile. Moose are most commonly found in forested or shrub habitats and generally avoid areas of open tundra. Moose seldom inhabit mountainous areas above 5,000 feet.

Summer – Moose eat forbs (herbs), grasses, sedges and leaves of broad-leaf trees and shrubs during the summer months from leaf-out in May until September. Moose are commonly seen in open meadows and in ponds during summer feeding on aquatic plants, but other moose summer in mountains lacking pond habitats. Moose drink large quantities of water during warm weather.

Fall – At some point in late August or early September, moose begin changing their diet to include woody browse of willow, aspen, poplar and birch. Migratory moose also begin moving to fall ranges for the rut, or breeding season. This movement during hunting season can present either opportunities or frustrations for moose hunters.

Winter – Early in the winter moose can be found near their rutting areas feeding on low shrubs such as diamond-leaf willow, which become snow-covered later in the winter. As snow accumulates, many mountain moose are forced to valley bottoms where they switch to tall shrub habitat, like the tall felt-leaf willow type, along rivers and creeks. Lowland burns with sapling aspen and birch are also used in winter.

Spring – The moose's diet shifts back to leaves and herbaceous plants as soon as these items become available in the spring. Migratory moose begin moving to favored calving and summer ranges which offer an abundance of herbaceous forage.

Some moose are year-round residents of one area and may live and die within an area of 5 square miles. Others are migratory, moving up to 100 miles between seasonal ranges. In some areas of the western Interior, moose migrate from mountainous habitats down to lowland rutting areas in the fall. In other areas, like the Fortymile country, moose move up to subalpine rutting areas.

In the Fortymile example, large mature bulls move first, followed by younger bulls as September progresses. Cows and yearling bulls are the last to move and join the older bulls in timberline rutting areas. Complicating this picture is the fact that, in many if not most areas, several sub-populations of moose exist that may have quite different patterns of seasonal movement. The result is that moose hunting can be very challenging.

How to Scout for Moose

The key to good moose hunting is knowing where bull moose will be during the fall hunting season. Many new moose hunters confine their scouting trips to summer months. However, many moose hunters are disappointed come fall when bull moose cannot be found on summer ranges where they were abundant in July or August.

If you do locate legal bulls in summer, hunt there on opening day—usually September 1 or even in August in some spike-fork/50-inch areas. You may get an opportunity to take a bull before they move away toward their rutting area. Yearling bulls are more likely to still be frequenting summer areas than more mature bulls, which start their fall movements earlier.

Another great scouting period is after the fall hunting season. Bull moose tend to stay near rutting areas for a month or two following the rut. Once you locate a fall concentration area, hunt there the next year as late in the legal season as possible.

No matter where you are scouting, keep alert for rubbed trees. Bull moose begin rubbing in early September to clean velvet off their antlers. Later in September they continue thrashing trees as a display of dominance. Such sign, even from the previous fall, indicates that bull moose use an area during the fall hunting season.

Droppings are another sign of fall range use. In summer they resemble cow patties—in winter, pellets. In fall, droppings appear as partially loose patties and partially pelletized. This reflects the seasonal change in diet from leafy to woody forage.

Moose have good senses of smell, hearing and eyesight to help protect them against their natural predators—humans, wolves and bears.

To avoid detection by moose, paying close attention to wind direction is, perhaps, of greatest importance. When “still hunting” or stalking, hunting with the wind in your face will be more productive than hunting with the wind at your back. Doing the latter carries your scent ahead of you toward your quarry.

When “still hunting” or stalking, using wool or synthetic fleece clothes will cause you to be quieter than clothes made of hard finished cotton or polyester. Jeans can be quite noisy. So can 60-40 cotton/polyester windbreakers and similar fabrics.

When glassing for moose, avoid sitting on skylines or out in open areas. Sit below skylines and near stumps or trees to break your outline. Moose can see and react to you from at least as far away as a quarter mile.

No matter what technique you choose, hunt very early and very late in the day; this is when bull moose are most active. Eat breakfast before sunup and dinner after sundown and maximize your hunting during prime times. 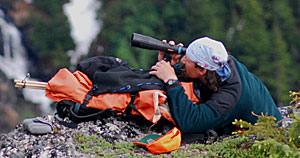 Stand Hunting/Glassing – When hunting in the mountains, select a spot with a good panoramic view of the hillside you are on, as well as the sides of other hills across drainages. Look for movement, dark shapes or white spots in your field of view. Seldom will you have a clear view of a whole moose. Most often you will just see a head, antler flash, or a part of a moose's body amid thick vegetation. Listen carefully early and late in the day for antler clashes, mating grunts or breaking branches which should alert you to the presence of a bull. Use a high quality pair of binoculars and a spotting scope on a tripod. See the page on spotting Alaskan game for more information.

Don't scan a view by moving your binoculars. Pick a spot, hold your glasses steady and look for movement or anything unusual. Then move your glasses to a new area and concentrate on it. Keep glassing nearly all the time, resting only to scan with your naked eye. Have faith that there is a bull somewhere—all you have to do is spot him. He may be bedded, he may be standing behind a tree or bush, but when he moves even partially into view, you will eventually see him.

Floating – Floating silently down rivers and creeks in a raft or a canoe is a very pleasant way to hunt moose. The object is to float quietly around a bend and see a bull eating willows on a gravel bar, drinking, or walking on a riverside trail. Good maps or aerial photos reveal side sloughs, meadows and ponds to stop and look over.

Road and Trail Hunting – Each fall hundreds of moose hunters can be found cruising Alaska's highways in trucks or trail systems with four-wheelers, hoping to see a bull alongside the road or trail. Most of these “cruisers” are unsuccessful at taking a moose and spend a great deal on gasoline. Instead, use roads and trails to get into good hunting country but then park your vehicle until you need it to haul meat.

Calling Moose – Whether you glass in the mountains, stalk on foot or drift in a boat, moose calling can help you to locate and even attract a bull moose. Many hunters use a combination of four basic sounds:

Some hunters make a megaphone of birch, cardboard or plastic to direct, project and add resonance to their mouth calls. To mimic a bull's antler scraping, you can use a yearling antler, the brow palm from a mature bull, a shoulder blade or an empty plastic milk jug.

In early September before the rut, bulls tend to group up but are not yet fighting. Antler scrapes on brush and soft “glucks,” a nonthreatening bull call, work well. Bulls may either come in to you slowly or respond by antler scrapes of their own. If a bull responds but won't come in, you must go to the bull, scraping lightly on brush as you approach from downwind. He will think you are just another bull coming in to socialize.

In mid-September, usually after the 10th and often not until at least the 17th, mature bulls become more aggressive toward each other. Their antlers are hardened and testosterone levels are increasing as the rutting time approaches. Antler scraping and “gluck” calls still work, but a full, powerful bull challenge can be especially effective. The sound is a deep “mu-wah” from deep in your belly, issued three or four times in succession. Make sure you hear bulls in the area challenging each other before you use the challenge call so that you don't intimidate them and run them off. A bull with cows a long way off will usually not leave the cows to come to you, so you go to him, scraping and challenging. When you get close, he may charge, so be ready. A bull without cows of his own is more likely to come to your call, thinking you may be a bull with cows. Spend at least a half hour at a calling place, because bulls can be called in from over a quarter mile away.

Late in the month, cow calls can be used to attract lone bulls without cows, and many hunters use the cow call exclusively with good success. North American cow moose have evolved to be more vocal than European moose. This is an adaptation to ensure that bulls and cows get together during the short rut, given the extremely low densities of some moose populations here. The call is a melodic, nasal “mo-ooo-ah” which starts high, goes low, and ends high.