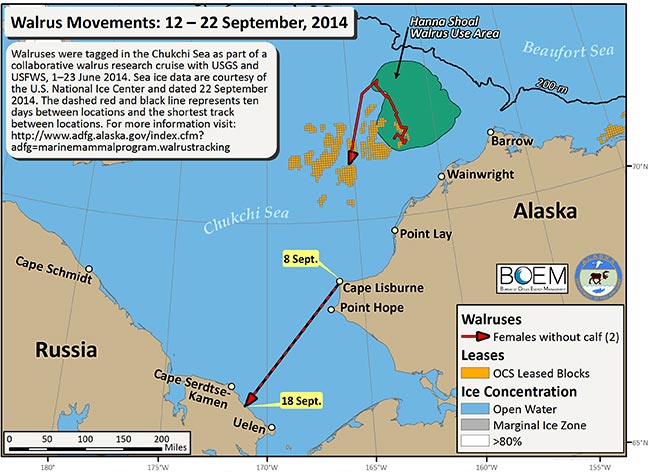 Over the last ten days we received transmissions from only 2 female walruses. One of these walruses recently left the Hanna Shoal Walrus Use Area and is moving south. The other walrus was located on only two days, 8 and 18 September. During this time the walrus moved south, from Cape Lisburne to the northern coast of Russia, between Uelen and Cape Serdtse-Kamen. We mapped the most direct path between these locations with a dashed red and black line.

In addition to the movement tracks of these walruses we mapped the OCS leased blocks (orange cubes), the Hanna Shoal Walrus Use Area (green), and the 200 m isobath (black line). Sea ice data are courtesy of the U.S. National Ice Center, dated 22 September 2014 (http://www.natice.noaa.gov/index.html). Funding for this project is provided by the Bureau of Ocean Energy Management (BOEM). Walruses were tagged in the Chukchi Sea from 1–23 June, 2014.