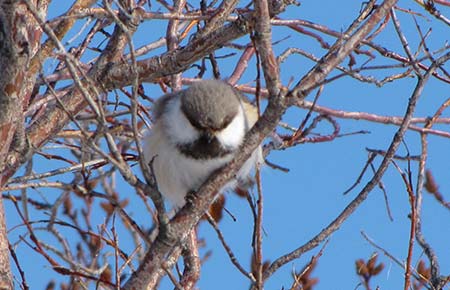 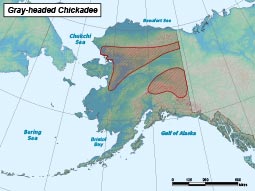 The gray-headed chickadee is one of the rarest regularly breeding birds in Alaska and one of the few cavity nesters in the subpolar regions.

The gray-headed chickadee, formerly known as the Siberian Tit, is a rarely seen Asian species that has become established in forest and stream-side habitats near tree line in central and northern Alaska. It is one of four chickadee species that occurs in the state and looks like a slightly larger, paler version of the more common boreal chickadee. Its white cheek patches are also larger than those of the other four species and its calls are distinctive and complex, most typically a “dee–deer” or “pee–vee.”

Territorial during the breeding season, chickadees flock during the rest of the year. Small flocks made up of several adult pairs and unrelated juveniles are commonly seen from late summer through winter.

Chickadees are specially adapted to endure Alaska’s rugged winters. They have much denser, better- insulating plumage than other songbirds their size and a special ability to put on fat quickly. Birds burn fat like fuel to keep themselves warm in winter. A chickadee can put on eight percent of their body weight in fat each day. Chickadees also drop their body temperature at night in order to conserve their winter fuel and “shiver” to keep their body temperature stable.

Gray-headed chickadees mate for life, nesting in breeding pairs generally by May. The nests are located in holes in trees. Usually the female begins excavating the cavity with some assistance from the male. The nest itself is built of soft materials, like hair, fur, and a few feathers, on a base of dry moss. The female alone lines the nest while the male remains nearby. Egg laying, in clutches of one to 11 eggs, begins two or three days later.

Chickadees are very acrobatic as they glean insects, insect eggs and larvae from leaves, twigs, branches and bark. Most of their diet is caterpillars and eggs of moths, aphids, scale insects, beetles and other insects and spiders. They may pull the wings of moths and discard before eating the insect. Seeds and berries are also eaten and fat may be scavenged from animal carcasses.

Like most chickadees, the gray-headed chickadee caches food regularly, often in lichen or crevices in tree bark. This behavior is probably critical for winter survival. Studies show they have an amazing ability to remember hundreds of hiding places.

The gray-headed chickadee favors open coniferous and hardwood forest. In Alaska, it may be found in tracts of willow or low spruce located in river valleys or along mountain bases where it is the sole chickadee species.

Its range extends into the Arctic and is nearly circumpolar. While a permanent resident, the young birds may wander south of the breeding range, particularly during harsh winters.

New World numbers are unknown but the species is in decline in the Old World, especially Scandinavia, due to logging pressures.

Populations have been declining since at least the 1940s.

Of all the chickadees, the gray-headed chickadee would appear to be most vulnerable to human disturbance. It lives in such harsh ecological conditions and is so sparely distributed that populations could decline rapidly.