The Quest for Gray-Headed Chickadees 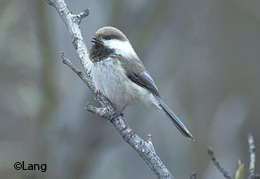 A grey-headed chickadee, the northernmost chickadee on the continent. Biologist Travis Booms is asking birders in Alaska to photograph and document sightings of this northernmost of chickadees. He’s hoping to learn about the distribution, abundance and population trends. Aaron Lang photo.

At the northern edge of the treeline in arctic Alaska and northwestern Canada, a hardy little songbird flits among the willows and spruce. Surviving the perpetually dark and freezing winters, nesting and mating in the verdant season, the gray-headed chickadee is one of the rarest regularly breeding birds in Alaska.

Travis Booms is on a quest to learn more about these rarely seen and little-known birds. A wildlife biologist with the Wildlife Diversity Program at the Alaska Department of Fish and Game, Booms is asking birders in Alaska to photograph and document sightings of this northernmost of chickadees. He’s hoping to learn about the distribution, abundance and population trends.

“We have a vague idea of where they occur in Alaska and no idea how many occur in the state or the status, if they are stable, increasing or decreasing,” he said. “It’s a species that has never had a formal study done on it of any sort (in North America). Because of the extreme lack of knowledge, it’s a species that could decline rapidly and we’d never know. There is no reason to think it is in decline, but we really have no idea.”

Booms said the gray-headed chickadee is a year-round resident of the state and does not migrate south for the winter like many songbirds. Records indicate that they have been found in Interior Alaska, usually in the winter. It is unknown if the recorded sightings are of birds moving south from northern Alaska or if they are year-round, though largely undetected, residents of the Interior.

“The current distribution suggests they range as far south as the lower Yukon River area in the southern Nulato Hills,” he said. “But a lot of the records from Interior Alaska are pretty dated; I’m interested if they do still occur in the Interior. The heart of their range is the southern slope of the Brooks Range, wherever trees large enough to have a cavity occur, they’re cavity nesters.” 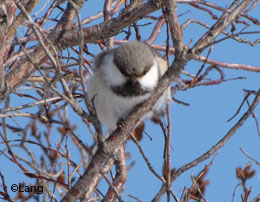 “I saw one last year near Old Crow Flats in the Arctic National Wildlife Refuge, right near the border,” Booms said. “The gray head was obvious and clear, it wasn’t black or brown, it was gray.”

“It can be difficult to distinguish,” he added. “It is a highly desired species for birders, so there are people wanting to turn a black-capped into a gray-headed. If there is any doubt, I'd say it’s not - the one I saw last year it was pretty obviously a gray- headed.”

Sue Guers is a research biologist with the Alaska Bird Observatory in Fairbanks. She studied black-capped chickadees for her master’s degree, and said she thinks there are behavioral differences between the chickadee cousins.

“Black-capped chickadees will come to your hand if you’re feeding them at a feeder,” she said. “But gray-headed seem like a different species all together, they’re very shy. Even if they are here in the Interior it doesn’t seem like they come readily to bird feeders, and you don’t see them in flocks in the winter time like you do with black-capped.”

Booms said there is one man he knows who has seen gray-headed chickadees on numerous occasions, a trapper named Heimo Korth.

“He and his family are grandfathered into the Arctic National Wildlife Refuge and they rotate between three cabins and trap and live in the bush. There’s a book about him, The Final Frontiersman. He has been observing gray-headed chickadees for about 30 years now. He’s not a professional biologist but he's an amazing naturalist, as most trappers are. He hasn’t written about them, but I’ve talked with him and he’s in touch with biologists. He’s been very, very helpful.” 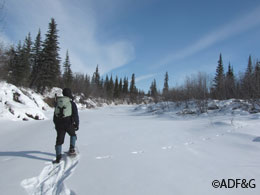 There is a Eurasian counterpart to the gray-headed chickadee, called the Siberian tit. However, the birds are simply different subspecies of the same species (Poecile cinctus).

The little birds’ key to surviving the northern winters is caching food. They pack as much foraging as they can into the short days, and set aside what they can’t consume. Like other chickadees, the gray-headed will tuck seeds and bits of food into scattered hiding places. Studies on chickadees show they have an astonishing ability to remember hundreds of hiding places.

“The size of their brain changes, the memory portion actually enlarges during the winter so they can keep track of where all their caches are,” Guers said.

Unlike some birds that will roost together at night to conserve warmth, gray-headed chickadees sleep solo. “They tuck themselves into a ball and fluff up in a cavity, and slow their metabolic rate,” Guers said. “They roost singly, although you’d think they would be in a group - you can open a nest box of bluebirds and there’ll be 20 in there, keeping warm.”

“You see chickadees come out of a cavity in the winter and their tail feathers are bent because they've been all cooped up in a little cavity to keep warm. It's amazing. I run the banding station here and we find some black-capped chickadees that are 10 years old; it’s quite a life - in the winter here they have four hours to find enough food to get through the day. Then you think about those gray-headed chickadees in the Brooks Range.”