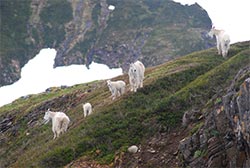 Goats are frequently seen in groups of varying sizes. Groups larger than three or four animals are usually made up of kids, adult females, and immature goats of both sexes. The likelihood of adult males being with these groups increases in November as breeding season approaches.

During most of the year adult males are more frequently found as solitary animals or in small isolated groups. If you see a lone animal bedded on the edge of a 2,000 foot cliff, chances are good it's a mature male. If adult males are found with larger groups of goats, look for them on the edge of the group. After a few minutes of careful observation, it usually becomes apparent which goats are females and which are males.

Mountain goats usually have only one kid, but twins sometimes occur. If you see a female with three or more kids you can bet that the rest of the group is on the other side of the ridge. It is illegal to harvest a female with a kid. Biologists suspect that orphan kids have a significantly reduced chance of survival during their first winter. Mountain goats generally have lower productivity than other game animals because of high mortality of kids and yearling animals. Maintaining a high number of mature females is desirable for good management of goats.

Males stretch their hind legs backward, slightly flexing and barely splaying their legs to the side.

Males often will have a yellow stained patch of hair on their hindquarters. The patch becomes more evident around the end of September and can be observed clearly from a good distance away. 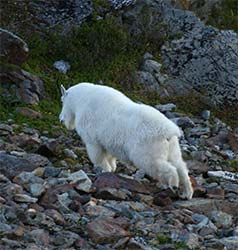 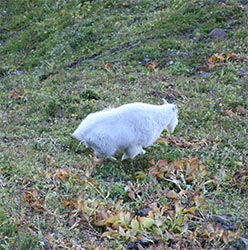