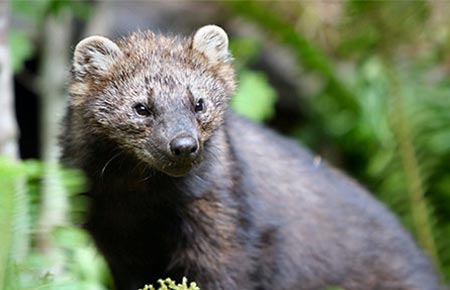 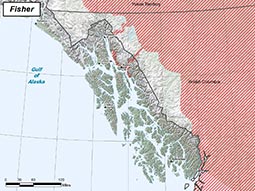 The fisher is not named for any fishing behavior, and does not fish. The fisher is called fisher cat in parts of New England. The name fisher may have come from early immigrants, who noted the fisher's similarity to the dark European polecat, names for which included fitchet, fitche, and fitchew.

Fisher are cat-like weasels, medium-sized carnivores related to marten and mink, with a general weasel shape but lacking the extreme elongation of the weasels. Their tail is about one third of total body length. They are sexually dimorphic and males are larger than females. Fisher and marten are digitigrade with five toes on each large, well-furred paw. Claws are sharp, curved, and semi-retractable but not sheathed.

The fur on the body and head is lighter in color than on the tail, legs, and shoulders. Fisher have dark-brown bodies with black legs and tails; their heads have a gold or silver, hoary appearance created by tricolored guard hairs. Many have irregular white or cream patches on their chests or groins; the chest patches never become so large as to resemble a chin or throat patch. Both fisher and marten can rotate their hind feet, allowing them to descend trees head first.

Fisher and marten mark with several scents. Urine and feces are presumed to be scent marks because fisher and marten often place them on stumps or other prominent structures.

Both sexes reach sexual maturity by one year of age, but effective breeding may not occur before two years of age. Female fishers generally breed for the first time when one-year-old. Females give birth in late March or April. After giving birth, females enter estrus and breed 7 – 10 days later.

Both marten and fisher delay implantation. A fertilized zygote develops to a blastocycst and then becomes inactive in the uterus. The blastocyst remains dormant until late winter, when change in day length induces implantation and active gestation. Consequently, adult female fishers are pregnant nearly all year, except for 7 – 10 days after giving birth. Parturition dates for fishers occur from late February through early May, but most litters are born in March through early April.

Litter sizes for fishers range from one to six, most commonly two and three. The young are called kits.

Marten and fisher, similar to other mustelines, are altricial and are born completely helpless with their eyes and ears closed. They are partially covered with fine hair. Kits begin to crawl at about three weeks; by three months, they climb. Fisher kits are completely dependent on milk until they are 8 – 10 weeks. A litter raised by its mother in captivity was weaned by her at approximately four months.

By 10 – 12 weeks, most kits are completely chocolate-brown. Through the summer and the early autumn, young fisher are the same general color as adults, but are more uniform in color. Fishers weigh well under 50 g (about 2 ounces) at birth, reach about 500 g (17 ounces) by 40 – 50 days, and thereafter begin to exhibit sexual dimorphism in size. By late summer or early fall, they approach adult size and sexual dimorphism is pronounced.

Fisher and marten exhibit intrasexual territoriality, which allows the home ranges of a male and a female to overlap, although the animals may compete for limiting resources in their area of overlap.

Natal dens used by mothers and neonatal young are typically in cavities in large logs, snags, or live trees. Maternal dens are used by mothers and older, but still-dependent young, and tend to be in less-specialized structures, more like resting sites, often high in hollow trees.

Fisher have lived longer than 10 years in captivity.

Diets of marten and fisher are similar in that both eat primarily rodents (Alaska-specific in parenthesis: red squirrels, red-backed voles, long-tailed voles, and Keen's mouse), lagomorphs (snowshoe hares), birds (sooty grouse), sometimes insects, and carrion when available. Individual studies suggest they are opportunistic predators influenced by local abundance and availability of potential prey. Marten in Southeast Alaska have been shown to prey on salmon, suggesting that salmon may act as an additional seasonal prey source for fisher. Fisher also prey on their fellow mustelids — ermine and marten. Although fisher and marten eat a large variety of foods, a few items tend to dominate.

The fisher porcupine predator-prey system has been the subject of considerable study. Fisher are skilled at killing porcupines, and are one of the few animals that target them. They bite at the face to injure and disable the animal, then flip it over and tear open the belly. The fisher's ability to climb down trees head-first is advantageous for attacking porcupines, which frequently climb up trees when threatened. Fisher may completely skin a porcupine, leaving the "quill coat" at the kill site, which is a sign of fisher activity. Fisher often leave the digestive tract uneaten.

Studies correlating the number of commercially harvested fisher pelts and the 10-year cycle of hare abundance suggest that snowshoe hares are important. Where snowshoe hares and porcupines are uncommon, the diets of fishers become more diverse and can include significant quantities of other mammals, reptiles, insects, and fungi. In some areas, fruits of shrubs and trees can constitute as much as 30 percent of the summer diet. Martens and fishers scavenge carrion readily and are easily lured to traps, track plates, or camera stations using meat as bait. Martens and fishers are active year-round, have a demanding metabolism and, especially martens, store very little energy as fat.

Fishers are found in mixed coniferous and deciduous forests across northern North America, from Maine to British Columbia, and historically as far north as the Yukon-British Columbia border. The fisher was not historically documented in Alaska. Since the mid-1990s, the fisher has undergone a range expansion into the southeastern Yukon Territory and Southeast Alaska.

In January 1997, a Juneau trapper brought Fish and Game a fisher caught in a trap set for marten, about 20 miles northwest of Juneau in the Eagle River area, the first documented fisher in Alaska. Between 1997 and 2009, three more fishers were trapped in that same area, and another just south of that area on Montana Creek. The fifth was trapped on the north side of the lower Taku River just south of Juneau.

In 2013 an open season was created for fishers, in part to encourage reporting. Between 2013 and 2018, trappers reported catching 18 fishers on the northern Southeast Alaska mainland. In 2017 it became apparent for the first time that fisher were moving south of the Taku River; four of the five fishers sealed in 2017 were caught south of the Taku River. One fisher from 2018 represents the northernmost fisher trapped to date, and was harvested in Berner's Bay.

The fisher is not listed under the endangered species act. There is currently a proposed rule under review to list the West Coast distinct population segment of fisher as a threatened species.

The fisher is an important furbearer, with an average fur price in Alaska of $35.62 as of 2016 (Parr, 2016). As a diet specialist on porcupines, fisher have the potential to regulate porcupine populations in areas of co-occurrence.

Over the course of the 20th century, the fishers' range was reduced significantly as a result of over-trapping and habitat loss due to logging. In an effort to reestablish fisher populations, reintroduction efforts began in Nova Scotia in the 1940s. Since that time, over 21 successful reintroductions have taken place across North America, ranging from the east coast of Nova Scotia and Pennsylvania to Idaho, Oregon, and British Columbia. Population monitoring efforts through governmental and state agencies as well as academic institutions are ongoing throughout the fishers' distribution. A 2018-2019 study conducted by the Alaska Department of Fish and Game in conjunction with the University of Idaho aims to determine fisher occupancy and habitat requirements in Southeast Alaska as well as examine the potential effects that this new mesocarnivore will have on native mustelids in the area.

This paper looks at fisher colonizing Southeast Alaska and their interaction with marten and ermine.

Spatial and temporal partitioning of mustelids in Southeast Alaska

Fisher and marten are digitigrade with five toes on each large, well-furred paw. Claws are sharp, curved, and semi-retractable but not sheathed.