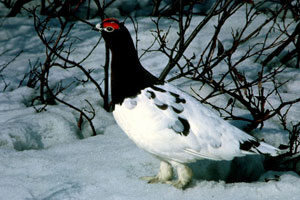 A willow ptarmigan in transition to its winter plumage

Some wags like to joke that the mosquito is Alaska’s state bird but we know better. The designation belongs instead to the willow ptarmigan (Lagopus lagopus), a stout sociable bird that is common across Alaska’s high treeless country. In 1955, as leaders of the Territory of Alaska were drafting a constitution in preparation for statehood, Alaska school children chose the willow ptarmigan as a symbol of the Great Land. It became the official state bird when Alaska was made the 49th state in 1960.

The willow ptarmigan is distinguished by its use of camouflage as protection against predators, changing its plumage from light brown in summer to snow white in winter. Another distinctive feature, its feathered feet, helps this sedentary bird negotiate the frozen ground. The willow ptarmigan is the largest of three “Arctic grouse” found in Alaska, which also include the rock and the white-tailed ptarmigan.

Ptarmigan are sociable in winter and usually feed and roost close together in the snow. In spring, they travel to their breeding grounds in flocks of several thousand. These flocks disperse in summer as the males elbow for foraging room on the tundra. Unlike other grouse, the male willow ptarmigan often takes responsibility for the young, defending them against predators.

The willow ptarmigan occupies a broad range throughout Canada, Scandinavia, Finland and Russia and is closely related to the famous red grouse of Scotland.