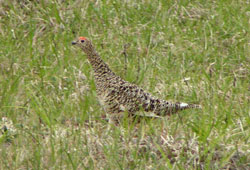 The bird’s habitat is upland and coastal tundra, especially rocky mountain ridges and shrub thickets. It nests on the ground. The rock ptarmigan once occurred throughout the Near Islands (Attu, Agattu, Shemya Nixki-Alaid) along the Aleutian chain but was eliminated from all but Attu by Arctic foxes that were introduced for fur production.

The rock ptarmigan lives in all major treeless areas of Alaska except the flat tundras of the western and northern coasts and feeds primarily on birch and willow buds.