This page depicts the most current land status for Afognak Island and describes all available public access easements. 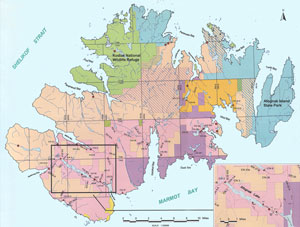 Afognak Island, part of the Kodiak Archipelago, is located 25 air miles north of the city of Kodiak. Forty miles long and twenty-five miles wide, it is the second largest island in the Kodiak group.

Mountains, dominating the southwest, an abundance of Sitka spruce and grasslands, and the many streams and lakes create a prime habitat for populations of fish and wildlife including brown bear, bald eagles, and Sitka blacktailed deer and Roosevelt elk. The combination of fish and wildlife, in addition to scenic beauty and remoteness, makes Afognak Island an attractive and popular destination for hunting and fishing. The island also offers other recreational opportunities such as sightseeing, boating, hiking, photography, and camping.

Lands on Afognak Island that are depicted as being owned by the Afognak Joint Venture (AJV) are subject to 1427(b)(5) of the Alaska National Interest Lands Conservation Act (ANILCA). This section of ANILCA states that these lands shall remain open and available to sport hunting and fishing and other recreational uses by the public under the applicable law (but without liability on the part of Koniag, Incorporated or any Koniag Village Corporation, except for willful acts, to any user by reason of such use), subject only to such reasonable restrictions which may be imposed by Koniag, Incorporated and the affected Koniag Village Corporations for the purposes of limiting or prohibiting such public uses in the immediate vicinity of logging or other commercial operations which may be undertaken by the corporations upon the affected lands. Such restrictions shall comprise only those restrictions necessary to insure public safety and to minimize conflicts between recreational and commercial uses. Koniag, Incorporated and the affected Koniag Village Corporations shall permit access to the lands on Afognak Island conveyed to them by employees of the State for purposes of managing fish and wildlife and by other State officers and employees, and employees of political subdivisions of the State, for the purposes of carrying out this subsection.