You are here: ADF&G Home » Hunting » Caribou
Sign in
myADF&G

Caribou (Rangifer tarandus) are large, stout members of the deer family, with concave hooves that splay to support the animal in snow or soft tundra and which function as paddles in water. Caribou live in the arctic tundra, mountain tundra, and northern forests of North America, Russia, and Scandinavia. Although they are called reindeer in Europe, only domesticated caribou are called reindeer in Alaska and Canada.

Caribou in Alaska are distributed in 32 herds (or populations) totaling approximately 950,000 animals. This includes in herds shared with Canada’s Yukon Territory. Although each herd uses its own unique calving area, different herds may mix together while on their winter ranges. Many herds winter in the boreal forest, but during the remainder of the year caribou prefer treeless tundra and mountains where they can get relief from biting insects.

Population numbers of caribou are somewhat cyclical, but the timing of declines and increases, and the size to which herds grow, is not very predictable. On average, people harvest about 22,000 caribou in Alaska each year. 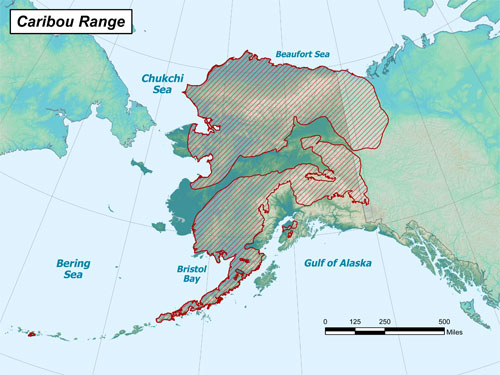 Caribou have the widest and roundest hooves of all deer species. Their large, concave hoofs are spread widely to support the animal in snow and soft tundra and function as paddles when caribou swim across lakes and rivers during migration. Male caribou tend to have larger front hooves than females.

Caribou scat differs in size and shape depending on the amount of moisture obtained in vegetation. During the winter, caribou diet on small shrubs with high fiber contents that appears in small, concave pellets. In the summer, scat is seen as soft clumps of mass resulting from a diet of lush, wet vegetation.