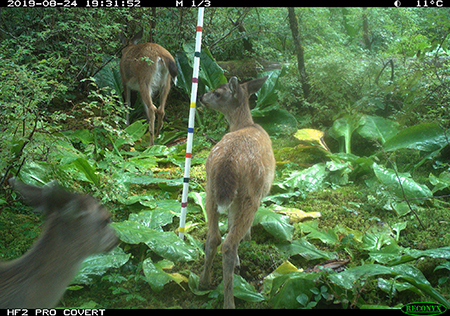 Three deer, and at least one fawn with spots, trigger the motion sensor on a trail camera on Douglas in August 2019. A new project is currently in the works to monitor Sitka black-tailed deer on Douglas, Mitkof and Gravina islands, which all see decent amounts of hunting pressure annually. ©ADF&G

One of the most popular islands to hunt for Sitka black-tailed deer in all of Southeast Alaska — Douglas Island — is also the site of a new three-year pilot camera project aimed to help biologists and wildlife managers with the Alaska Department of Fish and Game get more precise information on how many deer and of what age classes are using the habitat. Similar studies are being launched on Mitkof and Gravina islands, also due to their popularity among hunters.

ADF&G Area Biologist Roy Churchwell said the stars are aligning just about right when it comes to background for a project like this one.

“The statistics that make this project possible [were recently published.] They didn’t exist even three years ago,” he said. “So the science behind the statistics has changed a lot and is currently changing every year ... there’s a lot going on that is finally allowing us to do this kind of camera work.” 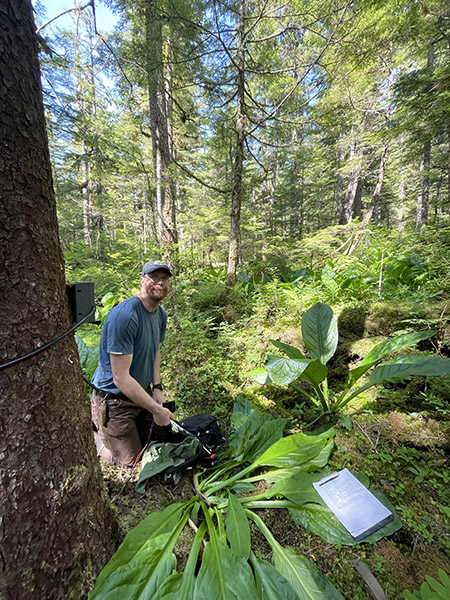 Juneau Area Biologist Roy Churchwell smiles after logging data associated with one of the camera sites on Douglas Island. Data such as canopy type, understory vegetation types and elevation, to name a few, are documented. A snowstake, pictured in the background, is placed five meters from each camera to help biologists document changes in vegetation and snow depth as seasons change. ©ADF&G/Abby McAllister

Douglas Island — a diverse and mountainous land mass that sits just to the west of Juneau, Alaska, and is separated by the narrow Gastineau Channel — is unique when compared to Mitkof and Gravina. Because of its proximity to Juneau, accessibility and productivity, Douglas arguably sees more hunters targeting Sitka black-tails than any other island in Southeast. A number of small communities and neighborhoods exist on the island, which is also populated by black bears, wolves, deer, grouse, ptarmigan, snowshoe hare and marten, to name a handful.

In recent years, however, hunters began to express concern over how long it took to harvest a deer, Churchwell said. Biologists too began also paying closer attention. 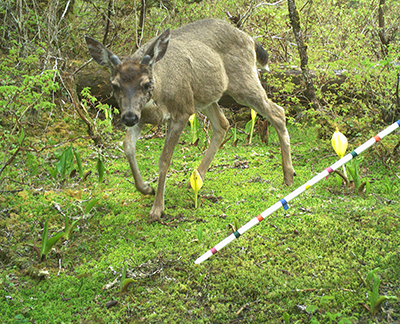 At one of the camera sites set on Douglas Island to monitor Sitka black-tailed deer, a button buck triggers the motion sensor in June 2021. ©ADF&G

In 2019, regulations were changed to limit one doe per hunter per hunting season in an effort to conserve female deer for an increase in population numbers.

This regulation sets Douglas apart. Churchwell decided to dig a little deeper when the new regulation went into effect, he deployed three cameras at sites on Douglas as an exploration.

“There was and still is so much interest in deer on Douglas, I just wanted to get any additional information we could,” he said.

He hoped the framework of such a project — having long-term cameras on the landscape, capturing deer in their winter habitat — would also allow him to tend to his diverse duties as area biologist.

Fast forward three years and the experiment has morphed into the “Sitka black-tailed Deer Monitoring Using Trail Cameras” project. On a hot July day in 2021, Churchwell and a small team of ADF&G staff boated around to the west shore of island to deploy six of the 15 Douglas-bound cameras as part of the current project. Camera sites were identified by first examining a U.S. Forest Service winter deer habitat model — essentially a map of what was predicted to be areas where deer would find food and shelter during times of moderate to heavy snow. Biologists placed a hexagonal grid overlay on the map, with cell sizes two kilometers squared. This is about twice the size of a deer winter territory and would help prevent counting individuals at multiple cameras. The project is structured so Churchwell and other biologists check the cameras, change cards and batteries once a year, each summer. 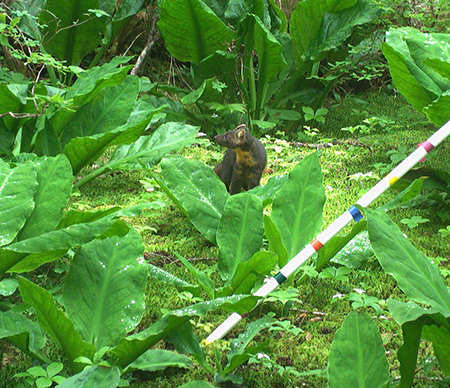 For the first time ever, an American marten was documented in July 2020 on Douglas Island with a trail camera used for a preliminary portion of the deer monitoring project. ©ADF&G

Each camera takes one picture per day so biologists can log changes to the habitat — like vegetative growth and patterns of snowfall — as the seasons shift. And of course, should any thermal movement be detected, that too will trigger the camera to fire. 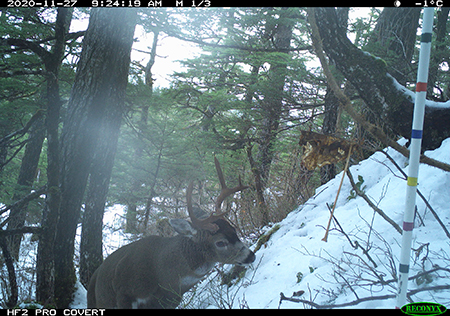 Many different age classes, including this buck, were captured in the initial phase of trail camera work on Douglas. ©ADF&G

During the early stages of the test phase, Churchwell’s three camera sites have already produced some interesting findings.

“We did get a lot of deer pictures and that was promising,” he said, “And then we got the first trail camera picture of a marten on Douglas Island.”

He said anecdotal evidence suggested marten lived on the island, but this is the first indisputable account.

All the cameras set on Douglas, Mitkof, and Gravina islands should give ADF&G biologists more information about how best to manage deer in the best interest of the public and for a sustained yield harvest. Deploying cameras may happen on different schedules for each office, but generally, data will be collected and annual maintenance will happen in June and July each year of the study, which will continue to 2024. 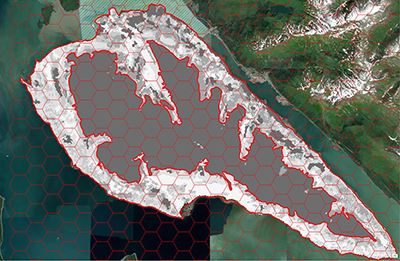 In order to select for areas where deer may select habitat in winter, biologists used an existing U.S. Forest Service map and overlayed a hexagonal grid. Camera sites were selected at random on the area depicted in white and light grey, which largely creates a doughnut shape around Douglas. ©ADF&G

In the meantime, conservation of the does on Douglas Island continues and the department recommends harvested deer retain naturally-attached evidence of sex. And as always, hunters should carry their valid hunting license, deer harvest ticket with them and make sure to check the regulations in the area they intend to hunt, before they head out into the field.

Abby McAllister is a contributing writer to Alaska Fish and Wildlife News and serves as an education specialist with the Alaska Department of Fish and Game’s Division of Wildlife Conservation. She is based in Juneau.