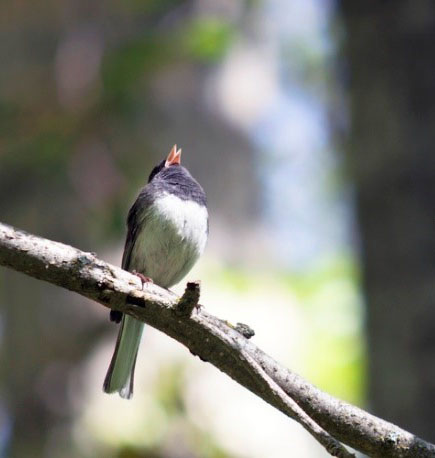 The melting snow in Alaska is often accompanied by an increase in birdsong as the state’s numerous migratory birds return. Many of these songs, trills, whistles, and drums are familiar to Alaskans, even if they can’t identify their owner. The acoustic overtures that fill the air on spring mornings mark the dramatic rise in avian biodiversity at northern latitudes as birds return from far-flung wintering areas for the breeding season.

To aid in the differentiation of these species, birders have assigned some phrases or mnemonic devices to help identify different calls, words said to the tune and speed of a bird call. A common call is that of the American Robin, a large brown-backed bird with a trademark red-orange chest. Their call is a little meandering compared to most songbirds and said to the tune of “cheer up…cheerily…cheerio,” each warble said quickly with a pause between the words. Another bird is the Golden-crowned Sparrow. Old gold miners waking up to the early morning song dubbed the little bird Weary Willie as its three-note call started high and descended with each note as an “IIIII’mmmm soooo tired,” expressed almost as a sigh. 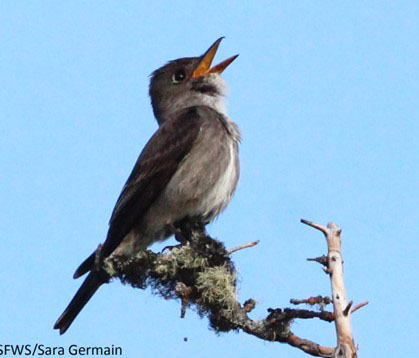 Olive-sided Flycatchers are another bird whose call is easier to remember with a phrase. Perching atop dead tree snags in coniferous areas, they announce their territory by calling out “Quick, Three beers!” This is the easiest way to identify this small gray bird. Rusty Blackbirds are aptly named as their calls have been compared to the rusty hinges of a door, while Red-breasted Nuthatches sound like broken squeaky toys, and Varied Thrushes evoke an image of a ghost calling out one slow echoing note across a misted moor. Another common songbird in Alaska is the Black-capped Chickadee, who has several recognizable calls. One can be remembered by the phrase “Heeyy sweet-ie” with a drawn out hey and a short two-note sweetie. Their name comes from the mnemonic device for another one of their calls, a classic “chicka-dee-dee-dee.” The chicka is a high click and the dee-dee-dee is more of a buzz. 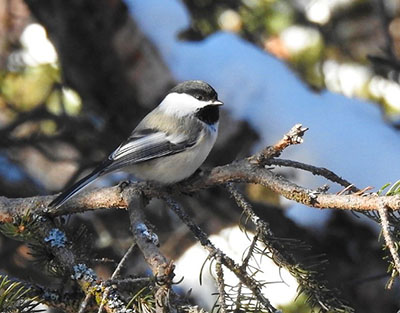 While these songs are a delightful sign of spring to us, singing is an important behavior in birds. For many species it is learned in almost the exact same way a human child learns to speak. Many birds sing instinctively and then develop their songs from listening to those closest to them. They spend their lives practicing and improving their singing, much as a person would learn a language. Interestingly, since birds learn from their parents and peers, they also develop the avian equivalent of regional accents, or song dialects. This stems from individual heterogeneity, where birds improvise their songs and influence their neighbors. Additionally, some birds can learn to imitate the music of other species. I once spent ten minutes searching for the source of a hawk call only to eventually realize that it was in fact a Steller’s Jay perfectly imitating the bird of prey’s piercing cry. 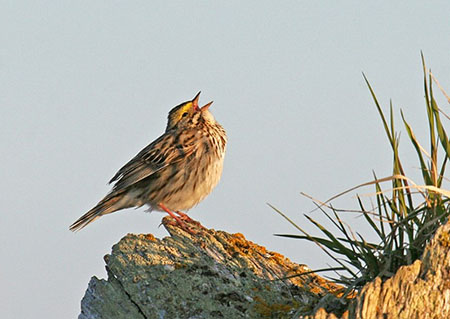 With nearly half of the world’s bird species identified as songbirds, there are a great deal of singers and, in some species, musicians (Wilson’s Snipe create a whistling noise by sending air across their tail feathers). Birds sing to attract mates during the breeding season, at which time males with the most impressive singing voices have better chances of finding a partner. But while singing is used widely for this purpose, a single bird may have a full repertoire of different songs and calls for varying reasons. Songs attract mates, but also announce a territory that has been claimed, and males will sing at strategic locations to mark the borders of his territory. Males are even thought to have “sing-offs” with trespassers, defending their territory by loudly calling at intruders. Other calls signal danger to other birds in the area or announce their location to their peers.

All these beautiful and sometimes incredibly complicated songs come from the bird’s voice box, called the syrinx. A songbird can control each side of this organ independently and so effortlessly sing two sounds at once. This means many songbirds compose music that can only be made by them. 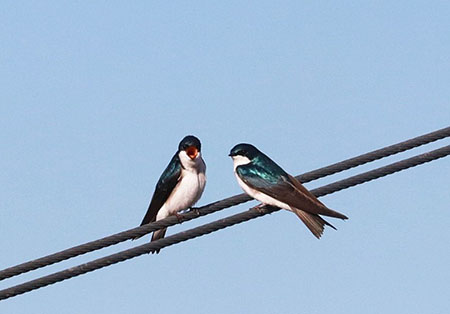 Outside of the realm of songbirds, other avian families employ their voices for similar reasons, if perhaps with less complicated syntax. Many seabirds develop calls to attract mates, give warnings, and to recognize and find their mates and chicks. Along the coastal Arctic, male Common Eiders can be heard letting out funny “AaaawwWWWooooo” sounds to attract mates. A call not dissimilar to one you might make upon a particularly good thrift store find. Common Loons have an echoing call that reverberates well across lakes and sounds almost like laughter. Since these vocalizations are simpler, these calls are thought to be more instinctual than the more complicated birdsong.

Any investigation into the vocal repertoire of a bird species yields varied and often unique results. While most birds vocalize in some manner, songbirds unquestionably claim the mantle of the most diverse and intricate songs of their class. If you want to try to recognize the birdsongs in your neighborhood you can investigate what songbirds live in your region and then explore the different calls they make (I suggest the Merlin Bird ID app for an easy library of bird calls by species). Identifying birds through their calls alone can become easier with practice and over the summer you may notice how the meaningless cacophony can turn into a carefully rehearsed orchestra. 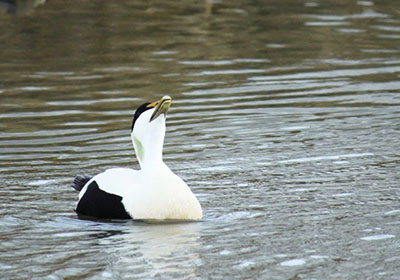 Many of the songbirds mentioned in this article have been featured in episodes of the Sounds Wild! radio program and their songs and more can be heard here SoundsWild Radio Program Alaska, Alaska Department of Fish and Game

More on viewing birds in Alaska