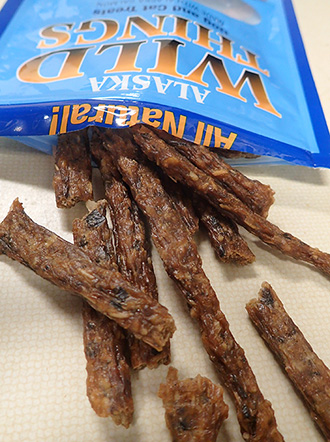 I started direct marketing fish I caught my second year of commercial salmon trolling in Southeast Alaska. My wife Sara Hannan and I sold fish off our boat. We also had a local fish processor in Juneau, Dick Hand and his business, the Alaska Seafood Company, process our dressed fish into frozen fillet portions for shipping out, and into smoked fillet portions that were canned in retort pouches. We put these pouches in a decorative box that told our story and sold them online, in tourist shops, and to health food stores.

Although I'd never owned a dog as an adult, most of my family and friends did. And it seemed they spared no expense in the happiness of their dog. With all of the fish going through our processor being cut into fillets, that meant we had a lot of "frames" left over. I decided to see what I could do to make some kind of dog treat. I tried to grind up the fish frames and extrude it to make a jerky, but it wouldn't hold together so I needed a binder. I knew the town had another surplus waste product - spent grain - from the Alaskan Brewery, and they were eager to give it to me to see if it would work. It did. I ground the frames in a meat grinder, added the grain, and extruded the mixture in a caulk-type gun onto a home dehydrator tray, dried the treats, then put the treats in the jars and attached home-made labels. 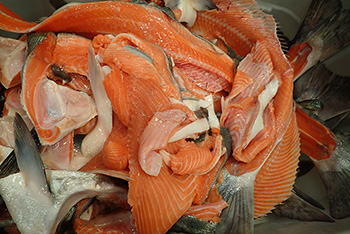 Now I had an all-natural pet treat stick with just these two ingredients. Just what dog owners seemed to want. The only problem was the treats smelled. Big time. I planned to sell the treats in a simple plastic jar with a screw-on lid, and even with the lid screwed tightly, the smell still found its way out. The smell was great to a dog or cat, but not to a shopper or the shop keeper. We had to put seals on the jars to contain the smell.

A processor drops scraps in a bin as he fillets fish for smoking.

I later left trolling and moved on to marketing fish for other Juneau fishermen. Dick took over production of the pet treats under his own label. When the Alaska Brewery began drying their spent grain to use as a fuel to operate their brewery, Dick switched to another grain as a binder. When garlic was noted to cause health issues in some dogs (but in quantities much larger than was in the pet treats), Dick changed to another natural herb to curtail the smell. Sales were solid. 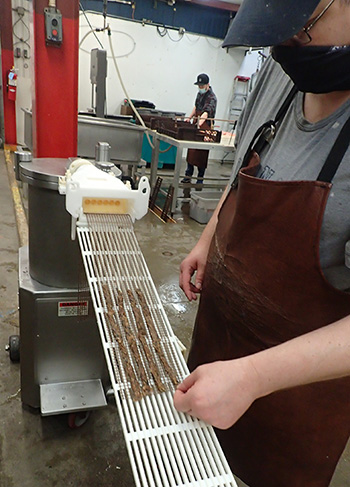 Scott shows the extruder, using finished treats to show how the damp, extruded product comes out.It is dried so it contains lass than one percent moisture.

With the pet treat portion of his business taking off, Dick has achieved virtually 100% utilization of fish that come into his plant, which both saves him on disposal costs and makes dogs and their owners very happy.

Note: The mention of specific products and businesses does not constitute an endorsement.